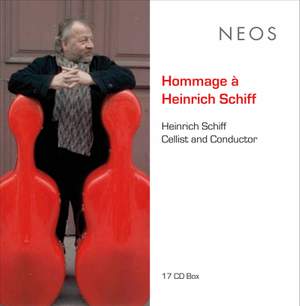 Cello Concerto in B Minor, RV 424: I. Allegro non molto

Symphony No. 1 in D Major "Titan": I. Langsam, schleppend

Zimmermann, B A: Cello Concerto

The cellist and conductor Heinrich Schiff had a career that spanned many decades.

After his studies with Tobias Kühne and André Navarra he made his debut as a cellist in Vienna and London in 1971. He was a regular guest of all leading orchestras, at the big music centres and at the major festivals in Europe, North America and Japan.

Throughout his career, he performed with conductors such as Abbado, Celibidache, Chailly, Dohnányi, Eschenbach, Gielen, Haitink, Harnoncourt, Jansons, Masur, Rattle, Salonen, Sawallisch, Sinopoli, Tennstedt and Welser-Möst and latterly released recordings of the main cello repertoire, ranging from Vivaldi and Haydn to Lutoslawski and B. A. Zimmermann.

Apart from his prize-winning recording of the Bach solo suites and the Shostakovich cello concertos (for the latter he was awarded the "Grand Prix du Disque"), Heinrich Schiff has recorded, among others, the Dvorák cello concerto (Vienna Philharmonic with André Previn) and the Schumann cello concerto (Berlin Philharmonic with Bernard Haitink). There was also widespread critical acclaim for the complete Beethoven works for cello and piano with Till Fellner, released in 2000. His most recent releases included a recording with Frank Peter Zimmermann (duos from Bach to Ravel).