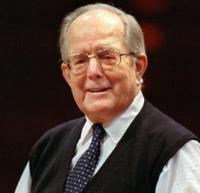 For much of his early career, Wolfgang Sawallisch was primarily associated with his birthplace of Munich and its vicinity; after a period of musical education interrupted by the Second World War, he took up a post at the opera house in Augsburg.

After two ten-year spells at the respective helms of the Vienna and Hamburg Symphony Orchestras (he had turned down offers from both the Vienna Philharmonic and the New York Metropolitan Opera!) he became Music Director of the Bavarian State Opera and focussed heavily on the operas of Wagner and Richard Strauss.

In 2006 he retired from the podium due to ill health.