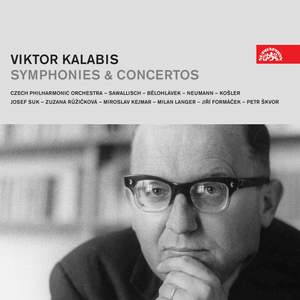 this excellent collection, despite the variable age and quality of some recordings, will do very nicely in bringing [Kalabis's] name before a wider audience — Gramophone Magazine, July 2013 More…

Kalabis: Concerto for Violin and Orchestra No. 2, Op. 49

To mark the 90th anniversary of the birth of Viktor Kalabis, one of the most distinguished 20th-century Czech composers, Supraphon is releasing this special selection of his symphonies and concertos. The life of Kalabis and his wife, the renowned harpsichordist Zuzana Růžičková, was first afflicted by war and subsequently by the straitjacket of the Communist regime. The two forms of lack of freedom would have a marked impact on Kalabis’s work.

His Sinfonia pacis, one of the most frequently performed contemporary Czech pieces abroad, reflects the escalating tensions of the Cold War, without the composer succumbing to the clichés of the Communist “peace” proclamations. In connection with Symphony No. 3 (1970-71), its creator talked about the anxiety prevailing during the post-occupation years, defiance, as well as the final resignation beneath the unceasing suppression of truth. Kalabis’s works duly enjoyed the attention of renowned orchestras, conductors and soloists (the Berliner Philharmoniker, Matačić, Casadesus, Blomstedt, Rilling, Ančerl, etc.). This new selection of recordings bears witness to a superlative composer, as well as the dark atmosphere of the time during which this music came to life. Viktor Kalabis’s symphonies and concertos – the legacy of a distinct composer and a fraught era.

this excellent collection, despite the variable age and quality of some recordings, will do very nicely in bringing [Kalabis's] name before a wider audience

there is no doubting the quality of all these musicians, Supraphon's original engineering or Kalabis's profound, stirring music