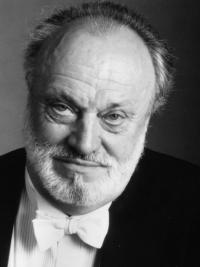 Born on 18th July in what was then Lower Silesia, Masur received his musical education in Leipzig, where he became Kapellmeister in 1970 following early positions in Berlin and Dresden. and remained there for the next quarter of a century.

Under Masur’s direction, the Gewandhausorchester were one of the few major ensembles to emerge from behind the Iron Curtain on a semi-regular basis throughout the 1970s and 80s, making appearances at major US venues including Carnegie Hall, whilst Masur himself frequently guested with American orchestras throughout the Cold War. (Notable Gewandhaus recordings from this prolific period include a much-praised Beethoven Symphonies cycle, some glorious Mendelssohn, and a majestic but never ponderous recording of Strauss’s Four Last Songs with Jessye Norman, which I’d rank among my favourite discs of all time). A well-loved and widely recognised member of the Leipzig community, Masur became much more than a purely musical figurehead in the city during the turbulent period leading up to German reunification, when he played a key role in diffusing a potential violent conflict in 1989 between pro-democracy protestors and the Stasi: operating under the rallying-cry “Keine Gewalt!” (“No violence!”), Masur and several other prominent Leipzigers convened talks in the Gewandhaus itself and successfully negotiated a peaceful outcome. He would later conduct a landmark performance of Beethoven’s Ninth Symphony in the city on 3rd October 1990

In 1991, Masur took up the position of music director at the New York Philharmonic, a partnership which would last over a decade and become one of the defining periods of his career. During his time in New York, Masur revitalised the orchestra in many respects thanks to his meticulous rehearsal-methods, scholarly rigour and quiet discipline (though he was passionately opposed to what he saw as the outmoded idea of the conductor as autocrat, adopting a more collaborative and egalitarian approach to music-making than many of his generation); a slew of regular live radio broadcasts and influential recordings followed, as did a substantial number of new commissions including John Corigliano’s Vocalise and Thomas Adès’s America (both 1999), and Hans Werner Henze’s Ninth Symphony (premiered in 2001). His deeply held conviction in the regenerative and consolatory qualities of art (so amply demonstrated during his time in Leipzig) came to the fore once again that same year, when he conducted Brahms’s Ein deutsches Requiem shortly after the September 11th attacks in a performance which prompted the New York Times critic Anthony Tommasini to remark that ‘Masur's unabashed belief in the power of music to make big statements and foster healing has sometimes invited kidding. No longer.’

Masur left New York the following year and subsequently took up the musical directorship of the Orchestre National de France in addition to continuing his regular work with the London Philharmonic Orchestra, for whom he had been principal conductor since 2000. He celebrated his eightieth birthday with both orchestras at the BBC Proms in 2007, in a super-sized performance of Bruckner’s Seventh Symphony which saw the Royal Albert Hall packed to the gunnells: The Guardian’s Stephen Pritchard observed that ‘those in the hall will count themselves blessed to have been among that fortunate 6,000.’ Five years later (after handing the reins of the London Philharmonic to Vladimir Jurowski, some 40 years his junior), Masur began to withdraw from public performance altogether as his struggle with Parkinson's made appearances on the podium untenable, but continued to support the next generation of conductors behind the scenes. He died in Greenwich, Connecticut, on 19th December 2015.

Find out more at https://en.wikipedia.org/wiki/Kurt_Masur

The German conductor (particularly famed for his interpretations of German Romantic repertoire) has died aged 88.