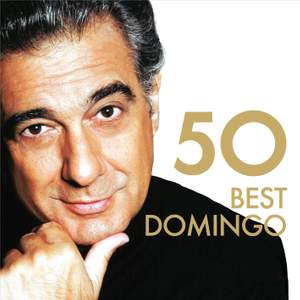 This 3CD set contains 50 tracks featuring probably the greatest tenor of this or any other age: Plácido Domingo. Born in Spain in 1941, Domingo spent his early life in Mexico where his parents, both singers, ran a company that presented zarzuelas (Spanish light operas) and other musical shows. His career has spanned the entire world in a wide range of operas in which he has sung over 120 roles, and in 1990 he made history when, with José Carreras and Luciano Pavarotti, he first appeared in Rome as one of the The Three Tenors, whose subsequent concerts and recordings broke all records for television viewing and record sales.

CD 1 is mainly a collection of arias and duets by Verdi. It begins with the stirring ‘Celeste Aida’ from Aida, which is followed by favourite items from Un ballo in maschera, La forza del destino, Don Carlo, Macbeth, Ernani, and Otello, after which comes a light-hearted performance of the Brindisi from La traviata recorded at the end of a Covent Garden Gala and Domingo invites the audience to join in. The CD concludes with two items by Puccini from La Bohème and La fanciulla del West.

CD 2 carries on with highlights from Puccini’s Manon Lescaut and Tosca and then moves on to arias from Boito’s Mefistofele and Mascagni’s Nerone, plus the delightful ‘Cherry Duet’ from Mascagni’s L’amico Fritz.