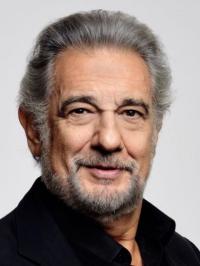 Plácido Domingo (born January 21, 1941) is widely regarded as one of the finest singers of his generation, well-known for his versatile lyric-spinto voice, compelling theatricality and intelligent interpretations of over a hundred roles. Born in Madrid to parents who were zarzuela performers, he grew up in Mexico and made his operatic debut in Monterrey as Alfredo after spending several years singing as a baritone in zarzuela. After making many important role debuts with the Israel National Opera in Tel Aviv, he returned to the US in 1965 to work for the New York City Opera and made his Met debut three years later, singing the title-role in Cilea's Adriana Lecouvreur opposite Renata Tebaldi. He has since sung 40 seasons at the Met, and opened 21 seasons.

His vast discography encompasses most of the major Italian, Russian and French romantic roles, verismo, bel canto, Mozart and Wagner as well as contemporary operas such as Tan Dun's The Last Emperor, zarzuela and rarities such as Torroba's Luisa Fernanda and Puccini's Edgar: particularly acclaimed as Otello, José, Cavaradossi, Faust, Florestan, Lohengrin, Parsifal and (on disc only) Tristan, he continues to expand his repertoire well into his sixties, recently committing his first baroque role (Bajazet in Handel's Tamerlano) to DVD for Opus Arte. In addition to his singing roles, he has also forged a significant reputation as an opera conductor as well as acting as the General Director of the Washington National Opera in Washington, DC and the Los Angeles Opera.

Find out more at https://en.wikipedia.org/wiki/Plácido_Domingo