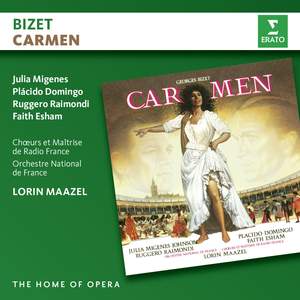 The thrillingly atmospheric soundtrack to a film of Carmen – directed by Francesco Rosi and released in 1984 – this recording unites Plácido Domingo, in one of his greatest roles as Don José, with Julia Migenes Johnson, a spirited, volatile Carmen of striking theatrical immediacy. Lorin Maazel demonstrates his mastery of French style in a performance that does full justice to Bizet’s amalgam of wit, elegance, romance and high drama.