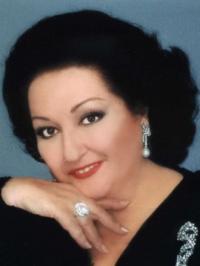 Caballé's international breakthrough came in 1965 when she substituted for an indisposed Marilyn Horne in a semi-staged performance of Donizetti's Lucrezia Borgia at New York's Carnegie Hall. While she had to learn the role in less than one month, and considering this was her first engagement in a bel canto score, her performance created a sensation and made her famous throughout the opera world. The day after the New York Times quoted "Callas + Tebaldi = Caballé". Later that year, Caballé made her debut at Glyndebourne singing her first Rosenkavalier and at the Metropolitan Opera as Marguerite in Gounod's Faust. In December 1965 she also returned to Carnegie Hall for her second bel canto opera, singing the tremendous part of Queen Elizabeth I in Donizetti's recently rediscovered Roberto Devereux.

In 1966 she made her debut at the Maggio Musicale Fiorentino in Trovatore (and Pirata in 1967). In 1969 she produced an astonishing performance as Elisabetta of Valois in an all-star cast (including Domingo and Cappuccilli) of Don Carlo at the Arena di Verona. Her A (La) on the final "ah" at the very end of the opera has become famous, lasting for more than 20 bars up to the final accord from the orchestra, driving mad an audience of more than 10.000. In these performances she had to act on crutches because an accident occurred earlier that year in New York City. In the same period she also appeared in one of the most remarkable recitals of her career at the Teatro Corallo, also in Verona.

In 1970, she made her delayed "official" La Scala debut in Donizetti's Lucrezia Borgia and in 1972 her Covent Garden debut as Violetta in Verdi's La traviata. 1974 was probably the year when Caballé reached her peak, with a number of astonishing performances: Aida at Liceu in January, Vespri at the Met in March, Parisina d'Este at Carnegie Hall in March, 3 Normas in one week at the Bolshoi in Moscow, with Adriana Lecouvreur at La Scala in April, Norma in Orange in July (her top single performance, filmed in video by Pierre Jourdain), the recording of Aida under Muti in July, and the Duets recording with Giuseppe di Stefano in August.

In September she underwent major surgery to remove a huge but benign tumoral mass from her abdomen. She recovered quite well and was again on stage for Norma in early 1975.

Having lost some of her earlier brilliance and purity of voice, Caballé made up for it finding a more dramatic utterance and expresive singing in roles that demanded it. Thus, in 1978, another great year in her career, she sung a magnificent Tosca in San Francisco, with Pavarotti, and in Madrid a sublime Norma. A video exists of this performance, for some even better than her legendary one in Orange.

Although best known for her bel canto roles, Caballé eventually sang over eighty operatic roles, from baroque opera to Verdi, Wagner, and Puccini, including the Marschallin in Richard Strauss's Der Rosenkavalier and the title role in Salome.

Caballé is also a noted recitalist, particularly of songs of her native Spain.

Her voice is noted for its purity, precise control, and power. She is admired less for her dramatic instincts and acting skills than for her superb technique, vocal shadings, and exquisite pianissimos.

Find out more at https://en.wikipedia.org/wiki/Montserrat_Caballé

The great Spanish soprano, renowned for her legendary pianissimi and superb command of bel canto, has died at the age of 85.