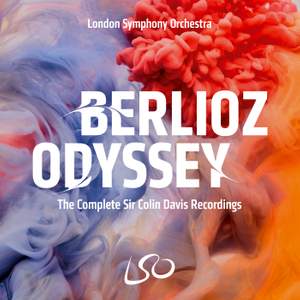 Davis was seemingly Berlioz’s disciple on earth, and this was the glorious late flowering of his love for the composer…Les Troyens crackles with a theatricality that outshines even the pioneering... — BBC Music Magazine, April 2019 More…

No. 12a, Scène et Récitatif: Introduction

No. 12b, Scène et Récitatif: Introduction

Colin Davis was internationally recognised as the foremost Berlioz interpreter of his time, and the recordings he made with the London Symphony Orchestra stand as some of the greatest accounts of the composer’s work ever recorded.

This 16 disc box set brings together all of Davis’ iconic Berlioz recordings made for LSO Live, from celebrated interpretations of popular orchestral works to landmark opera recordings, including the double Grammy Award-winning Les Troyens.

Davis was seemingly Berlioz’s disciple on earth, and this was the glorious late flowering of his love for the composer…Les Troyens crackles with a theatricality that outshines even the pioneering recording Davis made 30 years earlier, and The Damnation of Faust is similarly thrilling…David Cairns’s notes for the music are sometimes as revelatory as the performances.

[Symphonie Fantastique] This 2000 performance glows, achieving perfect balance between the lyric and the grotesque. The 2003 Harold en Italie, featuring a strong and eloquent Tabea Zimmermann, is more colourful even than with Imai in 1975. [Roméo et Juliette] The chorus excels, subtly in Juliette’s funeral procession and gloriously in the finale. [Faust] one of the finest performances ever recorded, including Davis’s 1973 account. The two great choral masterpieces of the Te Deum and the Grande Messe emerge as magnificent sonic experiences, the LSO brass on fire; they also offer deeply spiritual messages.