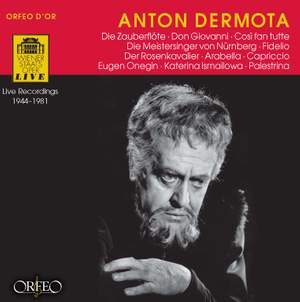 Where is the likes of Anton Dermota today?

The Slovenian tenor was not just a member of the Vienna State Opera ensemble for over 50 years, he was also a master of the stage and concert hall, celebrated all over the world from Milan to Buenos Aires. This new release of his performances at the Vienna State Opera makes evident this versatility. His Tamino is given here both at the beginning and the end of our selection,from the immediate post-war years under Karl Böhm, plus an excerpt from the run of performances under Sanderling with which Demota made his farewell to the stage in 1981, at the age of 71! Nor can Dermota’s interpretations of Ferrando and Don Ottavio be omitted from this double CD. It is delightful to contrast the buffo roles and Dermota’s exploits as a tenore lirico spinto, such as Florestan.

The tricky, brief roles in Richard Strauss’ operas, such as the Singer in Rosenkavalier and Matteo in Arabella, were ones he mastered superbly. They too are to be found here, as in the legendary Capriccio ensemble with Elisabeth Schwarzkopf as the Countess. Dermota appeared with various, equally splendid partners in Tchaikovsky’s Eugene Onegin – as Lenski he duelled before the radio microphone with George London and Dietrich Fischer-Dieskau, while as late as the 1970s he turned Monsieur Triquet’s burlesque into a subtle character study.