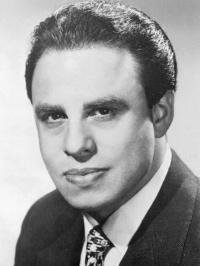 The wide-ranging, warm bass-baritone voice that emerges from George London’s recordings was enhanced on stage by a strikingly handsome appearance and an uncommon acting ability. He left a vivid impression as a captivating Don Giovanni, a properly brooding Eugene Onegin and mysterious Dutchman, a tortured Boris Godunov and Amfortas, a suavely malevolent Scarpia, and a dashing Escamillo.