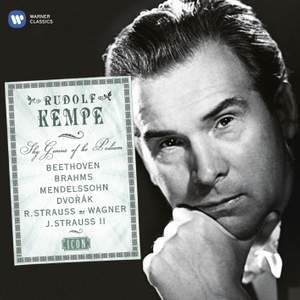 Rudolf Kempe: The Genius of the Podium

I. Allegro ma non troppo (Awakening of cheerful feelings on arriving in the country)

I. The Sea and Sinbad's Ship

II. The Story of the Kalendar Prince

IV. The Festival at Baghdad - The Sea - The Ship goes to pieces on a Rock surmounted by a Bronze Warrior

Smetana: Skocná - Dance of the Comedians (from The Bartered Bride)

Thema: Mäßig - The Knight of the Mournful Countenance

Variation I: Gemächlich - The adventure of the windmills

Variation II: Kriegerisch - The battle with the sheep

Variation IV: Etwas breiter - The adventure with the procession of penitents

Variation VIII: Gamächlich - The adventure of the enchanted boat

Variation IX: Schnell und stürmisch - The battle with the enchanters

Entr'acte No.3 in B flat

Gluck: Dance of the Blessed Spirits

The German conductor Rudolf Kempe (1910–1976) began his musical career playing the oboe in various symphony orchestras. He eventually graduated to being a conductor after working for several years as an operatic repetiteur. His modest manner on the podium belied his great authority in controlling an orchestra, and his warm but meticulously detailed interpretations of the main classical repertoire established him as one of the leading conductors of his time.

The programme begins with recordings of four Beethoven Symphonies that Kempe made with the Munich Philharmonic Orchestra in 1971–72 as part of a complete cycle that has been critically acclaimed, although it has not previously been widely available.

The next CD shows Kempe’s skill with descriptive ‘programme’ music in Mendelssohn’s delightful incidental music to Shakespeare’s ‘A Midsummer Night’s Dream’ and Rimsky-Korsakov’s colourful orchestral suite Scheherazade depicting a number of tales from the 1001 Arabian Nights.

Then comes music by three Bohemian composers: the opening of the famous ‘Largo’ from Dvorák’s ‘New World’ Symphony; the Polka from Schwanda the Bagpiper by Weinberger; and a suite from Smetana’s lively opera The Bartered Bride.

CDs 6 and 7 present several of the main orchestral works by Richard Strauss, including Don Juan., Ein Heldenleben, Till Eulenspiegel, Tod und Verklärung and Don Quixote, all except the last recorded with the Staatskapelle Dresden, an orchestra closely associated with the works of Richard Strauss.

CD 8 moves to the opera house and includes vocal extracts from Richard Strauss’s Ariadne auf Naxos and Wagner’s Lohengrin and Die Meistersinger von Nürnberg. The next CD covers orchestral pieces from opera, including a suite arranged by Kempe himself from Hansel und Gretel by Humperdinck

On CD 10 we find Kempe in lighter mood with the Vienna Philharmonic Orchestra in a programme of orchestral bon-bons that was called Vienna Philharmonic ‘On Holiday’ when it was originally released on LP. Tthe final CD covers some of the best loved music by the Strauss family. The very last track in the album is the waltz Gold und Silber by Franz Lehár, which Kempe considered the finest studio recording he ever made.