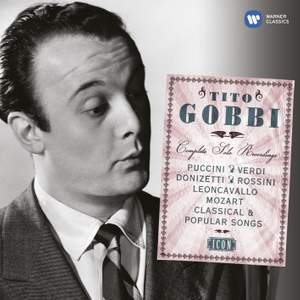 Pigarelli: La montanara (from the film The Glass Mountain)

This 5 CD set, devoted to the outstanding Italian baritone Tito Gobbi, is a further release in the EMI Classics ICON series. The bulk of this set is devoted to all the solo recordings that Gobbi made during his entire career, brought together for the first time.

The first CD begins with seven operatic arias (by Cilea, Leoncavallo, Mozart, Verdi and Puccini), and two songs (‘Musica proibita’ by Gastaldon and ‘Famme sunn’a cu’tte’ by Ruccione) that Gobbi made for the Italian branch of EMI in 1942. The songs were released only in Italy on a 78rpm record that had extremely limited circulation because of the Second World War, and are re-issued here by EMI for the first time.

The programme continues on CD 1 with further recordings that Gobbi made for EMI from 1948 onwards of operatic arias and songs, including two songs (‘La montanara’ and ‘Take the Sun’) that were featured in the 1949 film The Glass Mountain that brought the baritone to a wide cinema audience. He eventually appeared in more than 20 films.

CD 2 contains the rest of the songs and arias made up to the end of the 78rpm era, and finishes with the song ‘Nenia d’amore’ recorded in Italy in 1953 for the film Canzoni a due voci.

In 1955, Gobbi made his first LP recital album (with the forces of the Rome Opera), but it was not released at the time due to concerns about the technical quality of the recording. With the advance of technology the problems were subsequently able to be corrected and Gobbi later gave permission for material from the album to be released in various LP collections. The whole album is now heard here complete for the first time.

In 1964, EMI made a two-LP set called The Art of Tito Gobbi in which each of the four LP sides was devoted to a different genre, namely Operatic Arias, Classical Songs and Arias,

Italian and Neapolitan Popular Songs, and Romantic Songs. The programme repeated some of the repertoire on the as yet unpublished 1955 album but ranged much more widely, especially in the field of song. The operatic arias were made with the Philharmonia Orchestra under Alberto Erede; the classical songs with a small chamber ensemble consisting of harpsichord, cello and guitar; the popular songs with members of the Orchestra of the Rome Opera, and the romantic songs with the distinguished pianist Gerald Moore. This project marked the end of Gobbi’s recording career in solo repertoire.

The rest of the set covers extracts from some of the acclaimed complete opera recordings that Gobbi made for EMI, including Lucia di Lammermoor, Tosca, Aida and Rigoletto with the legendary soprano Maria Callas. Other operas featured are L’elisir d’amore, Simon Boccanegra, Don Carlo, Aida, Il tabarro, Il barbiere di Siviglia, Pagliacci and Gianni Schicchi. The programme ends with a memorable reminder of one of Gobbi’s finest assumptions, the title role in Verdi’s sublime Falstaff.