I've loved the music of William Walton ever since I first heard a performance of his great choral work, Belshazzar's Feast: its dazzling orchestral effects and extra brass bands had a huge impact on me as an impressionable youth, and I've delighted in discovering the rest of his compositional output ever since, especially Symphony No. 1 which instantly became one of my favourite twentieth-century symphonies.

Several of his orchestral works have entered the standard orchestral repertoire, and when it comes to the more obscure compositions, arguably no record label has done more than Chandos to provide high-quality recordings of almost his entire output, so it is only natural that my list below is somewhat dominated by their recordings. 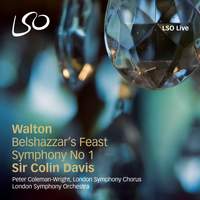 I always come back to this live recording of Symphony No. 1 with Colin Davis and the LSO for its power and volatility. The brass playing is magnificent, and there's a tender flute solo in the third movement, accompanied by some beautiful string playing. It comes with an equally admirable Belshazzar's Feast, with some splendidly incisive singing from the London Symphony Chorus and a fine solo contribution from baritone Peter Coleman-Wright. 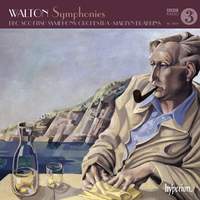 Much less frequently performed than the First Symphony, the Second Symphony is nevertheless a great piece, and it receives an ideal recording here from Martyn Brabbins and the BBC Scottish Symphony Orchestra, who negotiate the fiendish third movement Passacaglia with apparent ease and virtuosity. 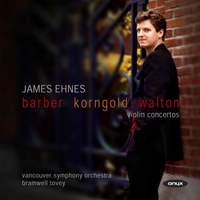 James Ehnes is one of my favourite violinists, and so it was no surprise that I should have found myself enchanted by his recording of the violin concerto. Ehnes beguiles and captivates in the searching phrases that begin the piece, and there's no shortage of dazzling fingerwork later on. The disc also includes equally outstanding recordings of the Korngold and Barber concertos, all accompanied by the Vancouver Symphony Orchestra under Bramwell Tovey, so there's absolutely no reason not to buy it! 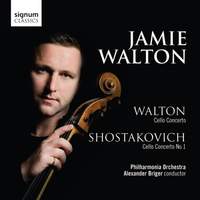 An exciting, commanding performance from British cellist Jamie Walton, with Alexander Briger conducting the Philharmonia Orchestra. Walton's tone is sumptuously full throughout, and as a bonus track he includes the original version of the last movement from 1956 (revised by the composer in 1975). 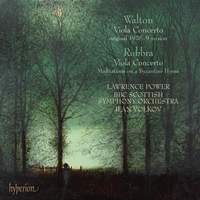 Some wonderful playing from Lawrence Power in this recording of the original 1928/9 version of the Viola Concerto. Power never sacrifices his rich, burnished tone even in the fastest passages, and the last movement is full of character. With excellent accompaniment from the BBC Scottish Symphony Orchestra under Ilan Volkov, this is a most impressive disc. 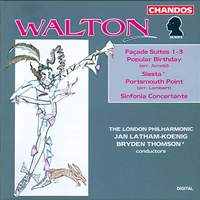 I've chosen my favourite recording of the original Façade entertainment below, but if you just want the orchestral suites that Walton later fashioned, then might I suggest this charming and witty recording from Bryden Thomson and the London Philharmonic Orchestra. The disc also includes a suitably languid performance of Siesta and an exemplary account of the little-known Sinfonia Concertante for piano and orchestra with Eric Parkin as soloist. 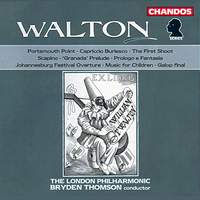 Bryden Thomson and the LPO do the honours again for this collection of overtures and other assorted pieces, including a rumbustiously salty Portsmouth Point, a charmingly nimble Scapino and a joyous, rhythmic recording of the Johannesburg Festival Overture. The disc also includes other rarities such as the delightful suite, Music for Children. 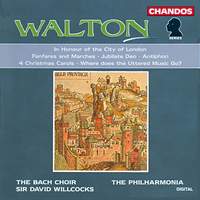 This is Walton in full ceremonial mode, including two of his best-known pieces, Crown Imperial, and Orb and Sceptre. David Willcocks brings out all the necessary pomp and splendour for these and other pieces, including two brief fanfares, A Queen's Fanfare, and Anniversary Fanfare, and the choral work, In Honour of the City of London, a paean to the capital with words by William Dunbar. 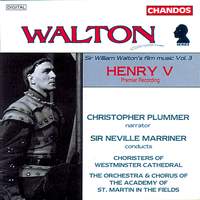 Walton also wrote much film music, and perhaps his most celebrated score was for Laurence Olivier's 1944 adaptation of Shakespeare's Henry V. This recording, with Neville Marriner conducting the Academy of St Martin in the Fields, presents an hour-long suite for narrator and orchestra (currently only available as a download). The two best-known excerpts from the score, namely the Passacaglia on the Death of Falstaff and Touch her soft lips and part, are exquisitely played, with a moving, beautifully-judged narration from veteran Canadian actor Christopher Plummer. 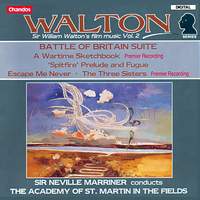 Among Walton's other film scores, his music for the 1969 film Battle of Britain was notorious for having been rejected and replaced with music by Ron Goodwin, save for two pieces which remained at the insistence of Laurence Olivier, who threatened to have his name removed from the credits if none of Walton's music was used. The surviving music is performed here in a thrilling recording, again with ASMF and Neville Marriner, alongside the Spitfire Prelude and Fugue from the 1942 film The First of the Few, and suites from other films. 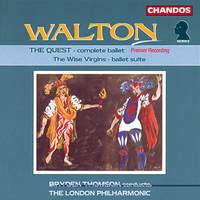 Ballets (_The Quest_ and _The Wise Virgins_)

Even less well-known than his film scores, Walton's only original ballet, The Quest, is still very much worth investigating, even if Walton himself admitted to being less than inspired whilst composing it! Bryden Thomson and the London Philharmonic Orchestra treat us to a colourful recording of the complete score, as well as a suite of the suriving music from The Wise Virgins, a 1940 Sadler's Wells commission where Walton was required to arrange and orchestrate music by Bach. 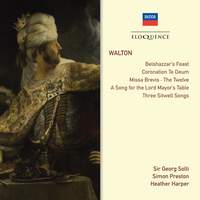 Georg Solti brings out the tragic elements of Belshazzar's Feast to great effect in this excitingly dramatic recording with Benjamin Luxon as the soloist. This set also includes a stirring account of the Coronation Te Deum with the combined might of the choirs of Salisbury, Winchester and Chichester cathedrals. 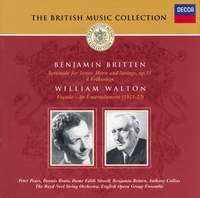 This setting of poetry by Edith Sitwell for reciter and six instrumentalists, in which the speaker is intended to be hidden behind a curtain but with a megaphone protruding, is perhaps one of Walton's more bizarre works. So who better than the poet herself to act as reciter, sharing the duties with Peter Pears in this classic recording from 1953, conducted by Anthony Collins. Both Pears and Sitwell bring an arch, deadpan style to their recitation that suits this piece perfectly. 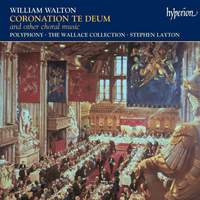 A fantastic collection of choral music from Stephen Layton and Polyphony, including a riveting account of my favourite Walton choral piece, The Twelve. Polyphony do full justice to the demanding writing in the Chichester Service, and the disc also includes delicate performances of Set me as a seal upon thine heart and King Herod and the Cock. 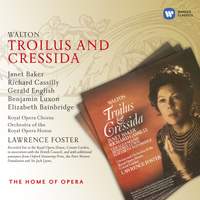 Janet Baker sings the role of Cressida in this live recording from Covent Garden of Walton's first opera, heard here in the revised version prepared specially for Janet Baker by Walton in 1976. Richard Cassilly sings the role of Troilus with great ardour, and there's a fine supporting cast including Gerald English, Benjamin Luxon, and Richard Van Allan, conducted by Lawrence Foster. 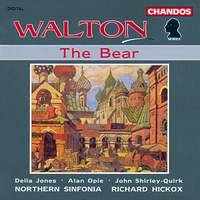 Walton's only other opera (described as "An Extravaganza in One Act" and based on a play by Chekhov) is on a much smaller scale, requiring just three singers, no chorus, and only a chamber orchestra. Richard Hickox conducts the Northern Sinfonia in a marvellous recording, with Della Jones, Alan Opie, and John Shirley-Quirk as the three soloists. 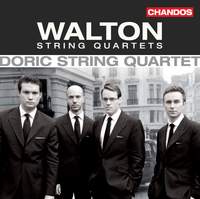 An impassioned recording from the Doric String Quartet of Walton's two works in this genre: the String Quartet in A minor and the less familiar Quartet of 1922, performed here in its original version, which restores the cuts made by Walton after a lukewarm response to the first performance. 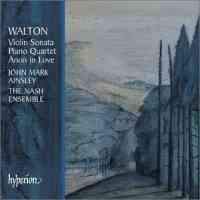 A collection of chamber music, including the Piano Quartet performed with aplomb by the Nash Ensemble, and a powerful account of the Passacaglia for solo cello by Paul Watkins. The disc also includes a performance of the Violin Sonata by Marianne Thorsen and Ian Brown, and the song cycle for tenor and guitar, Anon in Love, performed by John Mark Ainsley and Craig Ogden. 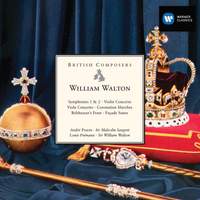 I have included this five-CD set mostly because of André Previn's superb recording of Belshazzar's Feast with the LSO and baritone John Shirley-Quirk. It has an exultant swagger that I don't think has been bettered by any recording since. You also get Previn's accounts of Symphony No. 2, and the Violin and Viola concertos with Nigel Kennedy as soloist in both, and finally Malcolm Sargent's 1966 recording of Symphony No. 1 with the New Philharmonia Orchestra.