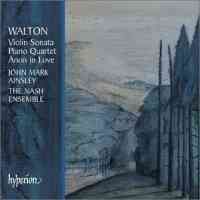 This excellent Hyperion issue brings together a wide-ranging group of Walton's chamber works, from his earliest major work, the Piano Quartet, originally written when he was 16, to his last instrumental... — Gramophone Classical Music Guide, 2010 More…

Walton: Anon in Love for tenor and guitar

I. Fain would I change that note

III. Lady, when I behold the roses

IV. My love in her attire

VI. To couple is a custom

Hyperion continues to salute Walton's centenary year with a selection of his chamber music. This is a collection of intimate works providing many insights into the composer's life. The Piano Quartet, for example, is the first work in which Walton considered he had shown any talent as a composer, and the Valse from Faade illustrates his irreverence towards popular music of the day. Before Anon in Love, Walton had yet to write for the guitar. The work was commissioned by Peter Pears and Julian Bream who coached him about the instruments characteristics. The Passacaglia arose from a friendship with Mstislav Rostropovich, who challenged the composer to write something for him. Loosely based on Bach's works for solo cello, the work comprises a theme and ten variations and was premiered by Rostropovich at Walton's eightieth birthday celebrations. A chance meeting with Diana Gould, the then-fiancee of Yehudi Menuhin, resulted in the prompt commission of the Violin Sonata. It was to become infused with tragedy following the death of Walton's partner of fourteen years, Alice, Lady Wimbourne, during the work's composition. Walton's overwhelming sense of loss is much in evidence and it now stands as one of his finest achievements.

This excellent Hyperion issue brings together a wide-ranging group of Walton's chamber works, from his earliest major work, the Piano Quartet, originally written when he was 16, to his last instrumental piece, the Passacaglia, which he composed for Rostropovich when he was nearly 80. As a substantial bonus there's the little song cycle for tenor and guitar, Anon in Love, as well as the two shorter pieces.
Helped by a spacious recording, the extra lightness and clarity brings an element of fantasy into such a movement as the Scherzo of the Piano Quartet and an extra tenderness into the lovely slow movement. Nowhere else does Walton so enthusiastically use modal thematic material, starting with the mysterious opening theme, which the Nash players take very reflectively at a speed much slower than the movement's main tempo, Allegramente. It's an astonishingly confident work for so young a composer, with adventurous writing for the strings that belies the fact that Walton was no string-player.
The Violin Sonata, a more elusive work, long underestimated, is given an equally persuasive performance, with Marianne Thorsen, accompanied by Ian Brown, freely expressive. John Mark Ainsley is totally undaunted by the taxing vocal writing of Anon in Love, originally designed for Peter Pears. And Craig Ogden is an ideal accompanist, totally idiomatic, adding sparkle to the vigorous songs in this offbeat collection.
Though Ian Brown gives a slightly sluggish account of Façade's 'Valse' – in the awkward piano transcription ascribed to Walton himself – cellist Paul Watkins crowns the disc with a fine reading of the solo Passacaglia.

a powerful account of the Passacaglia for solo cello by Paul Watkins.