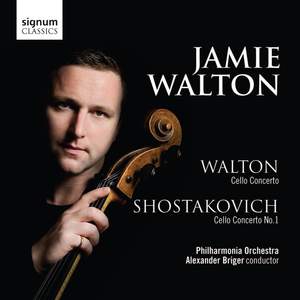 The outstanding British cellist Jamie Walton returns to disc on Signum, accompanied by the Philharmonia Orchestra under Alexander Briger. This disc includes Walton’s 1975 revision to the final movement of the cello concerto, which has never before been recorded or publicly performed (as well as a performance of the original final movement).

This disc completes an Anglo-Russian trilogy of recordings by Jamie with this orchestra and conductor, proceed by pairings of Elgar & Myaskovsky Cello Concertos, and Britten & Shostakovich (Cello Symphony & Cello Concerto No.2).

Jamie Walton's warm and beautifully focused way with the work excels in its own right...The same unflashily vivid brilliance brings in a rich harvest in Shostakovich's First Concerto...his keening way with the slow movement's lyrical lament marks out a remarkable player. Alexander Briger and the Philharmonia supply superb accompaniments.

The elegiac quality in [the Walton] very much suits Jamie Walton's style,with his sweet, smooth cello tone, but he is also capable of powerfully attacking the vigorous writing...[the Shostakovich] is a most compelling performance, very strong rhythmically, with the Philharmonia's first horn relishing what amounts to a concertante role...A most valuable and enjoyable disc

Walton's sound is superbly suited to [the Walton] - he has a singing, expressive upper register, as well as the agility to dive fearlessly into the more virtuoso passages; this is playing of tremednous authority and control...[In the Shostakovich] Walton and Briger generate impressive levels of rhythmic energy, and the playing has all the spiky allure one could wish for in this piece.

An exciting, commanding performance from British cellist Jamie Walton, with Alexander Briger conducting the Philharmonia Orchestra. Walton's tone is sumptuously full throughout, and as a bonus track he includes the original version of the last movement from 1956 (revised by the composer in 1975).

his rich, malleable tone and mature sense of style [are] deployed with the discerning interpretative personality that places him in the front rank of today’s cellists...the Shostakovich that is lithe, pungent and, just as it should be, profoundly disquieting.