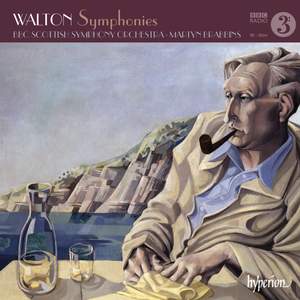 Brabbins never lets [the First] off the tight rein it requires, so that it sounds all the more powerful as a result: the ferocious climaxes are built and sustained with control, while the Andante... — BBC Music Magazine, September 2011, 4 out of 5 stars/1 out of 5 stars More…

Following the resounding success of Belshazzar’s Feast, Walton spent three years perfecting his dramatic first symphony. The immensely virtuosic work displays an astounding range of colours and emotional volatility, reflecting the turbulence of Walton’s private life. Despite its fraught gestation—the first performance in 1934 by the London Symphony Orchestra was missing the finale—this work met with an ecstatic critical reception and has remained popular ever since.

The second symphony, premiered by the Royal Liverpool Philharmonic Orchestra in 1960, is more concise and refined. Somewhat out of kilter with the austerity of its time, this masterpiece was slow to emerge from the shadow of its predecessor. Also included is the intimate orchestral work Siesta, from 1926.

Brabbins never lets [the First] off the tight rein it requires, so that it sounds all the more powerful as a result: the ferocious climaxes are built and sustained with control, while the Andante con malinconia convincingly resists its usual tendency to sprawl. The playing - featuring what must be the finest trumpet section in these islands - is top-flight

Brabbins brings a focused, tautly unified concept to each symphony, with great empathy shining out of the Lento of the Second

What is so good about the new Hyperion performances is the control of tension...The whole disc is a credit not only to the conductor but also to the quality of the BBC Scottish Symphony Orchestra which can stand comparison with any rival, not least in the quality of the woodwind solos.

unlike on many other recordings, both conductor and orchestra know one another's work and working methods well, and it shows here in many points of detail...As for the performances, it is impossible to imagine anything better than this, by turns so very exciting and very moving. Brabbins's tempos are absolutely spot-on...I have no doubt that this disc enshrines great conducting of a great orchestra in great music; the result is a record in a thousand.

Much less frequently performed than the First Symphony, the Second Symphony is nevertheless a great piece, and it receives an ideal recording here from Martyn Brabbins and the BBC Scottish Symphony Orchestra, who negotiate the fiendish third movement Passacaglia with apparent ease and virtuosity.

Neglected in the concert hall, Walton’s Second Symphony (1956-60) makes an ideal foil on CD for his more familiar First...Brabbins makes the strongest possible case for the work...Anyone tempted by both symphonies on a single disc need not hesitate.

Nobody since has managed to match [Previn's] combination of snarling menace and orchestral brilliance on disc, and it's a real achievement that Martyn Brabbins and the BBC Scottish Symphony come as close as they do to emulating it. Brabbins's account is a reminder that for all its derivative elements and bombast, Walton One is a powerful musical statement in its own right.

The dazzling brilliance and menacing darkness in Walton’s First Symphony are astutely caught here by the BBC Scottish Symphony Orchestra under Martyn Brabbins. The sensible coupling is the Second Symphony, not so warmly received when it was new but here attesting to its originality and emotional power.

the Second — unhappily premiered 25 years later, in 1960 — has not been much heard. One reason may be that its fizzing syncopations and phantasmagorical textures are fiendish to conduct and play. Martyn Brabbins and the BBC Scottish are thrilling champions.

Good performances do convince you that [The First] a masterpiece, and Martyn Brabbins’s account is very, very good. There’s plenty of savagery when needed, and the bombast is slightly underplayed but with no loss of energy or momentum...Brabbins’s performance [of the Second] really delivers, notably in the eerie slow interlude in the last movement, and the final brass-drenched minutes. It’s that good.