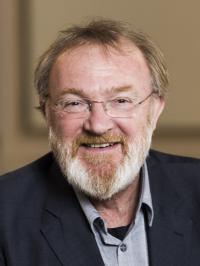 Martyn Brabbins was born in 1959 and began his musical life as a brass player before studying composition at Goldsmiths and conducting at the Leningrad Conservatory. In 1988 he won the Leeds Conductors Competition, leading to positions with the BBC Scottish Symphony Orchestra, the Cheltenham Music Festival and Sinfonia 21.

Brabbins is particularly renowned for his interpretations of British twentieth-century and contemporary repertoire: his 2011 performance of Havergal Brian’s gargantuan and rarely-performed Gothic Symphony at the BBC Proms attracted considerable attention, and was recorded live and subsequently released on Hyperion (‘credit to Martyn Brabbins for overseeing a performance which emphatically does not play it safe’ – International Record Review). Brabbins is president of the Havergal Brian Society and has recorded a number of the other symphonies and the Vision of Cleopatra on Dutton; his discography also includes a widely acclaimed Tippett series with the BBC Scottish Symphony Orchestra, and world premiere recordings of works by John Pickard, Howard Skempton, Brian Ferneyhough, Judith Weir, Sally Beamish and Harrison Birtwistle.

Brabbins was announced as the new music director of English National Opera in 2016, making his debut in the position with the world premiere of Nico Muhly’s opera Marnie.

Find out more at https://en.wikipedia.org/wiki/Martyn_Brabbins

Recording of the Week,  Vaughan Williams Symphonies from Martyn Brabbins and the BBC Symphony Orchestra

Martyn Brabbins continues his Vaughan Williams cycle with the sharply-contrasted Third and Fourth symphonies, as well as the première of a newly-restored work for tenor, chorus and orchestra.

Martyn Brabbins conducts the Huddersfield Choral Society and the Orchestra of Opera North in a stirring new recording of Elgar's rarely-performed cantata, Caractacus.