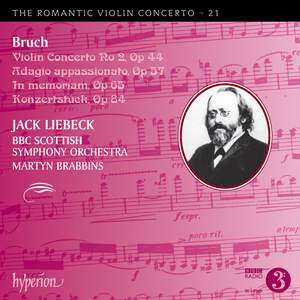 The ‘justly celebrated’ Jack Liebeck (as described by The Strad) follows in the footsteps of Heifetz and Perlman in championing Bruch’s now neglected Violin Concerto No 2, originally written for Sarasate. Three shorter concertante works for violin and orchestra complete the album (Bruch thought the Adagio appassionato one of his best works) which marks volume 21 in our highly regarded Romantic Violin Concerto series.

Throughout the Second Concerto, with its unforgettable soaring opening, Liebeck combines a beguiling silvery sound with tantalising interpretative restraint, free of heart-on-the-sleeve rhetoric…rarely has Bruch’s melodic genius been sounded with such chaste sweetness as here, ideally complimented by Liebeck’s captivating narrow-fast vibrato

There’s much to admire in Jack Liebeck’s patrician account of Bruch’s D Minor Violin Concerto. His playing is virtually flawless in its technical ease, scintillating articulateness and purity of tone.

Impressive performances of the Concerto and of the ‘lesser’ pieces.

Liebeck is certainly equal to all the challenges, moving from impeccable double-stopping one moment to the sweetest, most ardent of tones in some of the more impassioned passages.

as Jack Liebeck’s nicely restrained performance shows, [Bruch's Second Violin Concerto is] a piece that’s perfectly capable of standing on its own musical feet. His fine-grained playing gets exemplary support from Martyn Brabbins and the BBC Scottish Symphony Orchestra, who never overdo the menace that underlies the first movement especially