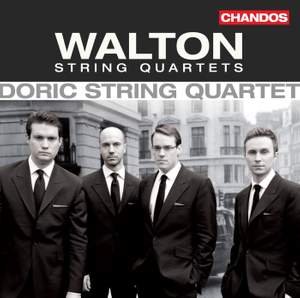 the early Quartet is a remarkable creation, with its searching chromaticism, huge technical strength, and formidable finale...The Doric Quartet play both works with an ultra-focused vividness... — BBC Music Magazine, August 2011, 3 out of 5 stars More…

Walton: String Quartet in A Minor

This new release represents one of the comparatively rare recordings of the highly attractive string quartets by William Walton, one of England’s finest composers. The works are performed by the Doric String Quartet, exclusive Chandos artists and among the youngest and most impressive quartets on the classical music scene today. Their recent release, of the string quartets by Korngold (CHAN10611), was given ‘Editor’s Choice’ in Gramophone.

Walton’s two string quartets, written about a quarter of a century apart, are barely recognisable as the work of the same composer. The String Quartet of 1922, an extraordinarily ambitious work in terms of scale and technical demands, was written when Walton was in his late teens. The familiar Quartet in A minor is a work of Walton’s maturity, more compact in form, conservative in language, and relaxed in tone.

When first performed, the String Quartet of 1922 was met with a lukewarm response, which led Walton to withdraw it and to make several substantial cuts to the material. When the work was revived, a few years after his death, for performances and recordings – including its premiere recording, on Chandos (CHAN8944, Gabrieli String Quartet) – these cuts were kept. This particular recording, however, offers the full-length and original version, as edited by Hugh MacDonald in 2008 for Oxford University Press’s William Walton Edition. Significantly, this quartet is for the most part conspicuously lacking in the Stravinskyan constant changes of time signature, which are such a prominent feature of the later works by Walton. In the composer’s own words, this work is ‘full of undigested Bartók and Schoenberg’.

It seems to have been in the late 1930s that Walton first agreed to write the String Quartet in A minor for the Blech Quartet (led by Harry Blech who later became the founding conductor of the London Mozart Players). But during the Second World War other projects intervened, mainly scores for war-time propaganda films, and it was not until late 1944 that Walton started work on the quartet. The return to the string quartet genre did not come easily to Walton. As he wrote to a friend in 1945, ‘I’m in a suicidal struggle with four strings and am making no headway whatsoever. Brick walls, slit trenches… I’m afraid I’ve done film music for too long’.

Despite his initial difficulty, the work gradually took shape, and Walton wrote to the same friend a short time later that he had ‘captured a trench’ and ‘overcome some barbed wire entanglements’. The String Quartet in A minor was completed in time for its successful premiere in 1947 by the Blech Quartet in a chamber concert on the BBC’s new Third Programme.

the early Quartet is a remarkable creation, with its searching chromaticism, huge technical strength, and formidable finale...The Doric Quartet play both works with an ultra-focused vividness that's very effective in bringing out the early Quartet's sophisticated, Schoenberg-influenced range of light and shade.

[a] blazingly committed and triumphantly assured rendering [of the early Quartet]...I was particularly smitten with the Doric's glowing treatment of the rapturous slow movement [of the A minor]...which they survey with a beguiling, almost conversational flow yet no loss of intimacy or piercing ardour...Make no mistake, this is a terrific disc in every way.

The Doric Quartet responds with great understanding to it and does well in making the most of the parts of the two works when, for different reasons, a good counsel for the defence is called for. The recording, too, gives an excellent account of music that, even when Walton was young and inexperienced, shows the keenness of his ear for texture.

An impassioned recording from the Doric String Quartet of Walton's two works in this genre: the String Quartet in A minor and the less familiar Quartet of 1922, performed here in its original version, which restores the cuts made by Walton after a lukewarm response to the first performance.

Walton’s two string quartets make a satisfying disc, and this recording of No 1 has the advantage of being the first of the uncut original version...Both works are superbly played by the Doric String Quartet.

The Doric gives outstanding, virtuoso performances of William Walton’s two string quartets. The first of them, formidable in its technical demands and harmonic language, is virtually unrecognisable from the Walton of maturity...but, when played with such panache, it provides a pungent contrast to the clarity and spry rhythmic sparring of the later A minor Quartet.

Hats off first for the stunning recording. Every bow stroke hits home as if the players are there in your living room. Another bouquet for the musicians’ mastery of the three Ps: polish, passion, precision. Absorbing repertoire, too.