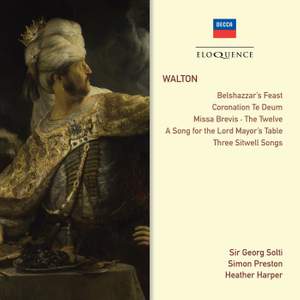 3. Babylon was a great city

4. In Babylon Belshazzar the King

6. Thus in Babylon the mighty city

7. And in that same hour

8. Then sing aloud to God our strength

9. The trumpeters and pipers

10. Then sing aloud to God our strength

Walton: Where Does The Unuttered Music Go?

1. Without Arms Or Charm Of Culture

3. Children Play About the Ancestral Graves

Walton: A Song For The Lord Mayor's Table (cycle devised by C. Hassall)

This 2CD set reveals two sides of Walton, the composer of music for the voice. CD1 features the extravagant side of the composer with multiple choirs and a huge orchestra for swaggering performances of the Coronation Te Deum and Belshazzar’s Feast, both with Sir Georg Solti conducting. CD2, with all items released on CD for the first time, features the more intimate side of the composer, with settings of choral miniatures, from the earliest setting (Drop, drop, slow tears of 1917) up to the 1972 Jubilate. Simon Preston’s LP was released on Argo to mark Walton’s 70th birthday. The remainder of the items come from a L’Oiseau-Lyre LP coupling songs by Walton and Machonchy and performed by Heather Harper. A Song for the Lord Mayor’s Table was commissioned by the Worshipful Company of Goldsmiths for the first City of London Festival; the texts were chosen by the English dramatist and poet Christopher Hassall and the poems come mostly from 18th-century verse related to London. The collection is rounded off with Walton’s Three Songs to poems by Dame Edith Sitwell date from 1932, all based on the composer’s Façade.

Heather Harper’s singing … is a constant pleasure. Paul Hamburger, a first-rate accompanist who has appeared far too little on records, plays the quite demanding piano parts with great skill and sensitivity

Georg Solti brings out the tragic elements of Belshazzar's Feast to great effect in this excitingly dramatic recording with Benjamin Luxon as the soloist. This set also includes a stirring account of the Coronation Te Deum with the combined might of the choirs of Salisbury, Winchester and Chichester cathedrals.