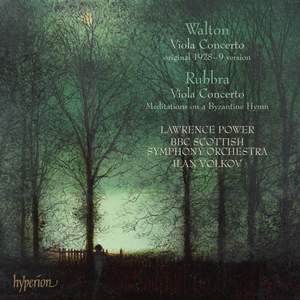 …Lawrence Power's… playing is stunningly precise, crisply articulated and beautifully projected, with no hint of the little scrambles and occasionally pinched tone that beset even quite famous... — BBC Music Magazine, July 2007, 5 out of 5 stars More…

Rubbra: Meditations on a Byzantine Hymn for solo viola, Op. 117

Power is a latter-day Orpheus, an expression of musics power to disarm, encourage, soothe and serenade (Financial Times) This recent appraisal of Lawrence Power affirms his status as one of the foremost violists of today. His unremitting musical eloquence and brilliant technical ability have consistently drawn the highest praise for all his recordings and performances. In our record of the month for June, Lawrence is joined by the BBC Scottish Symphony Orchestra and Ilan Volkov. The disc brings together three major pieces by two outstanding and highly individual English composers. Waltons Viola Concerto is one of his greatest workshaunted throughout by the dreamy opening melody, yet suffused with action and vigour, exhibiting the dazzling, biting brilliance familiar from works such as Faade. The eloquent epilogue, wrote Waltons biographer Michael Kennedy, remains the single most beautiful passage in all his music, sensuous yet full of uncertainty. It is presented here in the original 1928 version in its first modern recording. Rubbras Viola Concerto is also one of its composers major works, demonstrating the new musical depths he had sounded with his Sixth Symphony and showing influences of the symphonic traditions of Tchaikovsky and Sibelius. Alongside it we have the first recording of Rubbras Meditations on a Byzantine Hymn for solo viola, an extended virtuoso work of religious and solemn aspect. Lawrence Powers instinctive understanding and feel for this music together with the great musicianship of his collaborators make this a disc as much to be treasured as their recent recordings of York Bowen and Cecil Forsyth concertos.

…Lawrence Power's… playing is stunningly precise, crisply articulated and beautifully projected, with no hint of the little scrambles and occasionally pinched tone that beset even quite famous rival recordings.

It is good to welcome a modern recording of Walton's Viola Concerto in its original orchestration.
When in 1938 Frederick Riddle, principal viola of the LSO, first recorded this seminal work, Walton had yet to slim down the orchestration to make the concerto more accessible.
But even dedicated Waltonians may not notice much difference, particularly when in this fine recording the balance marginally favours the solo instrument. Yet as Leo Black suggests in his booklet-notes, the result 'perhaps conveys to a greater extent the freshness and grittiness of Walton's original conception'.
This was in many ways the breakthrough work in Walton's early career; it brought together in full maturity his distinctive mixture of yearning lyricism and jazzily syncopated writing. Lawrence Power serves the work superbly. Riddle's is arguably still the finest version (Dutton Labs), with speeds marginally faster than modern versions, something approved by Walton. Yet Power is not much slower than Riddle in the Andantecomodo first movement. In the finale differences in timing between Riddle and modern versions is greater, largely because of the final expansive epilogue, which clearly echoes the accompanied cadenzas of Elgar's Violin Concerto.
The two Rubbra items here are welcome. His orchestration in the Concerto is never as clear as Walton's but it suits his musical idiom with its reliance on perfect fourths and other open intervals, as well as plainsong. The Meditations on aByzantine Theme, the first recording in the version for unaccompanied viola, makes an apt extra. All told, a superb disc, much to be welcomed.

It is good to welcome a modern recording of Walton's Viola Concerto in its original orchestration. Lawrence Power serves the work superbly, with subtler detail than Lars Ansers Tomter (Naxos, 5/96) and a lighter vibrato than Nobuko Imai adopts (Chandos, 4/93). ...the two Rubbra items here are welcome. The Meditations on a Byzantine Theme, the first recording in the version for unaccompanied viola, makes an apt extra.

Some wonderful playing from Lawrence Power in this recording of the original 1928/9 version of the Viola Concerto. Power never sacrifices his rich, burnished tone even in the fastest passages, and the last movement is full of character. With excellent accompaniment from the BBC Scottish Symphony Orchestra under Ilan Volkov, this is a most impressive disc.

In the 21st century, one new name stands out, the British player Lawrence Power, and this disc swiftly tells us why. He’s fleet-fingered. He’s various: the changing hues never stop. He’s effortlessly eloquent with a centred tone across his entire range.