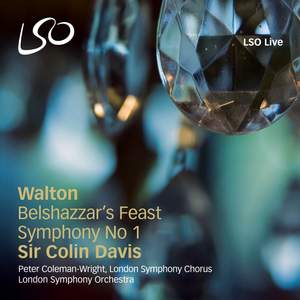 If you like your Walton unleashed at full and scalding voltage, look no further. The [LSO's] trademark virtuosity and panache are so great, and the players' unravelling of Walton's demanding... — BBC Music Magazine, June 2011, 4 out of 5 stars More…

III. "By the Waters of Babylon"

IV. "Babylon Was a Great City"

VIII. "And in That Same Hour"

IX. "The Trumpeters and Pipers"

X. Allegro - "Then Sing Aloud to God Our Strength"

DSD recording, live at the Barbican September 2008 (Belshazzar’s Feast) and September/December 2005 (Symphony No 1) Stereo and multi-channel (5.0).

In 2006 LSO Live released Walton’s First Symphony conducted by Sir Colin Davis. The disc received widespread acclaim – it was an Editor’s Choice in Gramophone and voted CD of the Year by listeners of BBC Radio 3 CD Review. It is now being re-released, coupled with a new recording of Walton’s spectacular oratorio Belshazzar’s Feast.

Walton’s Symphony No 1 and Belshazzar’s Feast, which were written consecutively, helped him consolidate his reputation as the most exciting British composer of his generation. Belshazzar’s Feast, a superbly crafted oratorio, vividly depicts the story of Babylon’s excesses and subsequent downfall, brilliantly coloured by the orchestral forces, including two brass bands. Similarly effervescent, volcanic sentiments simmer beneath the surface of the First Symphony, the music conveying the tensions of the 1930s, whilst remaining timeless in its appeal.

LSO Live has recently released Sir Colin’s recording of Verdi’s Otello and the first in a cycle of Nielsen Symphonies. Forthcoming releases include Haydn’s The Seasons.

If you like your Walton unleashed at full and scalding voltage, look no further. The [LSO's] trademark virtuosity and panache are so great, and the players' unravelling of Walton's demanding part-writing in the First Symphony so clear, that their performance penetrates straight to the heart of the music...[in Belshazzar] the central 'Feast' and closing 'Hymn of Praise' are each propelled by a rampant percussive firepower...Coleman-Wright is a formidable soloist

Sir Colin Davis here reclaims the vigour of youth and harnesses it to his deep understanding of Walton's work. Where others dwell on surface detail, Davis consistently reveals the larger picture: listen, for example, to the 'writing on the wall' scene in Belshazzar, urgent, violent and ultimately cathartic. The LSO carries this music in its DNA and possesses the means to make it live in concert.

Davis inspires [the LSC] – and baritone soloist Peter Coleman-Wright – to a reading of technical polish, rhythmic energy and evangelical conviction, with a climax strong enough to convince even the doubters. The First Symphony suffers from a more muffled acoustic, but the performance is so gripping – the LSO at its virtuoso best – that you quickly get swept up in it.

Davis emphasizes more than usual the operatic element latent in the work and with which he is perhaps more familiar. Isaiah's opening prophecy of disaster is dramatically sung by the excellent chorus...The work springs instantly to life, and the lament of the Psalm setting 'By the waters of Babylon', one of its finest parts, is imbued with a sense of tragedy...Davis draws beautiful playing from the orchestra.

I always come back to this live recording of Symphony No. 1 with Colin Davis and the LSO for its power and volatility. The brass playing is magnificent, and there's a tender flute solo in the third movement, accompanied by some beautiful string playing. It comes with an equally admirable Belshazzar's Feast, with some splendidly incisive singing from the London Symphony Chorus and a fine solo contribution from baritone Peter Coleman-Wright.

The LSO Chorus give Walton’s grateful choral writing all they have, and the orchestra revel in his brilliant and unconventional orchestration: E flat clarinet, alto saxophone, exotic percussion and extra brass. Davis, too, proves an absolutely authentic performer. He has come late to this thrilling choral drama on disc, but better that than never.