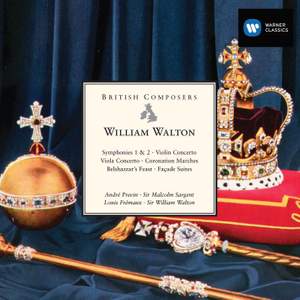 Previn's superb recording of Belshazzar's Feast...has an exultant swagger that I don't think has been bettered by any recording since. — Presto Classical, July 2014

If I forget thee, O Jerusalem

By the waters of Babylon

Babylon was a great city

Praise ye the God of Gold

Thus in Babylon the mighty city

And in that same hour, as they feasted

Then sing aloud to God our strength

The trumpeters and pipers are silent

Then sing aloud to God our strength

Walton: Improvisations on an Impromptu of Benjamin Britten

Is Cressida a slave? (Troilus / Cressida)

Slowly it all comes back (Cressida)

How can I sleep? (Cressida)

If one last doubt (Troilus / Cressida)

A box set which traces Walton’s career from its early days (his first orchestral work Portsmouth Point) through to the composer’s late sixties, this 5-CD compilation presents a fascinating selection of some of his largest-scale works. Ranging from the intense private display of the Viola Concerto—an instant success which quickly became revered the world over—to the ceremonial pomp of Crown Imperial, all facets of Walton’s compositional character are explored, fully justifying his status as the leading composer of his generation.

Previn's superb recording of Belshazzar's Feast...has an exultant swagger that I don't think has been bettered by any recording since.