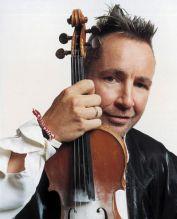 (b Brighton, 28 Dec 1956). "Kennedy," as he chose to be known for a time, is an individualistic and undeniably talented violinist who has emerged as one of the bona fide stars of the rich generation that came of age in the last quarter of the twentieth century. He has made a point of discarding what he sees as the conservative, staid traditions of classical concertmaking, and his personality may be summed up as flamboyant.

He studied at the Yehudi Menuhin School and the Juilliard and made his Festival Hall début with the LPO in 1977, playing in Berlin (1980) and Australia (1981) and touring in the USA (1985). He is specially admired for his playing and recording of the Elgar Concerto and the Vivaldi Seasons, a driving performance that rapidly became a bestseller; he is also known for his playing of jazz and rock.

Find out more at https://en.wikipedia.org/wiki/Nigel_Kennedy

Recording of the Week,  Nigel Kennedy

The maverick violinist impresses in ‘rhythmically driven and playful’ Beethoven, but fails to convince in a Mozart concerto which sees him take up an electric violin for the cadenza…