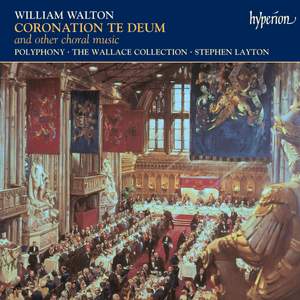 and other choral music

This disc has important bonuses that all Walton devotees will value. The inclusion of The Wallace Collection brings an immediate advantage in the first choral item, the Coronation Te Deum, when... — Gramophone Classical Music Guide, 2010 More…

Walton: King Herod and the Cock

Walton: All this time

2002 marks the year of three great occasions: Firstly, the music world celebrates the centenary of the birth of Sir William Walton. Secondly our Commonwealth celebrates the 50th anniversary of the Coronation of Her Majesty, Queen Elizabeth II. In January of this year to mark these events, Stephen Layton directed Polyphony and The Wallace Collection through three days of what can only be described (from personal experience) as spellbinding recording sessions of a disc of Walton choral music. The third great occasion of this year is its release. In 2001 Polyphony won the Gramophone Award for Best Choral Recording for which Gramophone remarked This has to be one of the strongest winners of the choral award in recent years. And yet Stephen Layton has followed that accolade with a disc that comprises such breathtaking singing, the listener will be left staggered by such a mighty force of combined musicianship and talent. Patrons will have heard the repertoire, and now they have the opportunity to purchase the definitive version, complete with brass, the wonderfully sonorous organ of Hereford Cathedral, and the acoustics that such a majestic building has to offer. This disc, quite simply, is British choral music at its best, and Stephen Layton and Polyphony at theirs.

This disc has important bonuses that all Walton devotees will value. The inclusion of The Wallace Collection brings an immediate advantage in the first choral item, the Coronation Te Deum, when the extra bite of brass adds greatly to the impact of a piece originally designed for very large forces in Westminster Abbey. Brass also adds to the impact of the final item, Antiphon, one of Walton's very last works, setting George Herbert's hymn Let all the world in every cornersing. The new disc also includes Walton's four carols, which makes this as comprehensive a collection of Walton's shorter choral pieces as could be imagined. As for the performances and recording, the professional group, Polyphony, with sopranos very boyish, have many of the advantages that the St John's Choir offer on Naxos in bright choral sound set in an ecclesiastical atmosphere. The acoustic of Hereford Cathedral is a little washy in places, and the balance of some of the solo voices is odd at times, yet the merits of these performances far outweigh any slight reservations, with the professional singers a degree more warmly expressive than the all-male St John's Choir.

Baker sings the role of Cressida in this live recording from Covent Garden of Walton's first opera, heard here in the revised version prepared specially for Janet Baker by Walton in 1976. Richard Cassilly sings the role of Troilus with great ardour, and there's a fine supporting cast including Gerald English, Benjamin Luxon, and Richard Van Allan, conducted by Lawrence Foster.