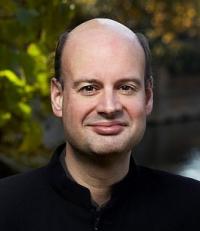 Layton was raised in Derby, where his father was a church organist. He was a chorister at Winchester Cathedral, and subsequently won scholarships to Eton College and then King's College, Cambridge as an organ scholar under Stephen Cleobury.

Whilst studying at Cambridge, Layton founded the mixed-voice choir Polyphony in 1986. He was appointed the musical director of the Holst Singers in 1993, replacing Hilary Davan Wetton, who had founded the group in 1978. Layton has served as assistant organist at Southwark Cathedral and musical director of Wokingham Choral Society.

The young singer, conductor and composer talks to David about his choral works as recently recorded on Hyperion by Stephen Layton and The Choir of Trinity College Cambridge.

Interview,  Stephen Layton on the choral works of Stanford

Stephen Layton, Director of Music at Trinity College Cambridge, talks to David about his recent disc with the chapel choir.