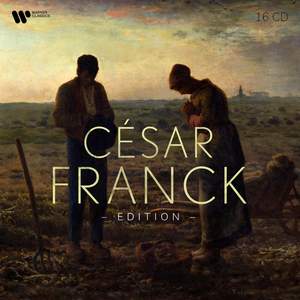 A towering figure in French music of the later 19th century, César Franck created a distinctive fusion of German Romanticism and French Classicism, enriching the symphonic, chamber, instrumental, vocal and sacred repertoires. As a teacher and mentor he gained admiration for his modesty and generosity while exercising a powerful influence on younger disciples such as Vincent d’Indy, Henri Duparc and Ernest Chausson. The César Franck Edition gathers together all his masterworks – among them the Symphony in D, Violin Sonata, Prélude, Fugue et Variation and, of course, ‘Panis Angelicus’ – in enthralling performances by musicians of the first rank. Running to 16 CDs, the collection includes a CD of transcriptions and arrangements, proving their fascination for a still greater diversity of interpreters than Franck might have imagined. The five CDs of historical recordings – dating back as far as 1907 – testify to the continuing growth of his reputation after his death in 1890, and to the vibrant performing tradition engendered by his genius.

10th December 2022 marks the 200th anniversary of César Franck (1822-1890). Born in Belgium, but subsequently a French citizen, he is a towering figure in French music of the later 19th century. Today, Franck is especially admired for his works for orchestra, organ and piano, and for his chamber music, while his hymn ‘Panis Angelicus’ is one of classical music’s ‘greatest hits’. As a teacher and mentor, he influenced a number of major French composers of the generation that followed him.