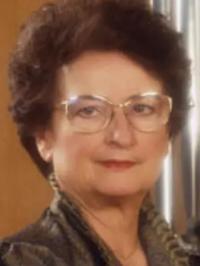 Marie-Claire Alain (1926-2013) was born in Saint-Germaine-en-Laye, where her father Albert was parish organist; she began to take an interest in his work in her early teens, and went on to study with Marcel Dupré and Maurice Duruflé at the Conservatoire de Paris. She went on to make well over 200 recordings, including three sets of the complete organ works of Bach, and was widely recognised as one of the greatest organists of the twentieth century; she also championed the music of her brother Jehan (who died in World War Two when she was still a student) and her father throughout her career, recording Jehan’s complete compositions for organ for Warner Classics. Her vast discography also included the complete organ works of César Franck, Widor’s Organ Symphonies, the Poulenc Organ Concerto, Saint-Saëns’s Organ Symphony, and Messiaen’s La Nativité du Seigneur.

Find out more at https://en.wikipedia.org/wiki/Marie-Claire_Alain