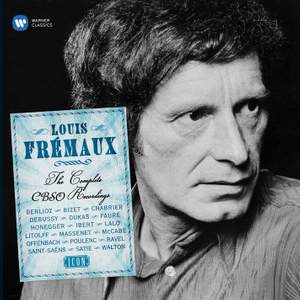 There's a lot of French music in this set: earthy readings of Poulenc’s Gloria and Les biches alongside a host of rarities...Walton’s Bach-inspired ballet The Wise Virgins is fun, and there’s... — The Arts Desk, 22nd July 2017 More…

I. Gloria in excelsis deo

III. See What Love Can Do

VI. Praise Be To God

Sullivan, A: The Gondoliers, Act 2: "Take a pair of sparkling eyes" (Marco)

This 12-CD set joins Warner Classics’ Icon series, which pays homage to some of the greatest recording artists of the recent past. The box is devoted to the French conductor Louis Frémaux, who, from 1969 to 1978, preceded Simon Rattle as Principal Conductor of the City of Birmingham Symphony Orchestra. For the first time, it assembles all the recordings that Frémaux and the CBSO made for EMI. Over the course of the 1970s their discography played a substantial role in building the orchestra’s international reputation before the arrival of Rattle as its Principal Conductor in 1980. Indeed, such was the orchestra’s prowess in the French music favoured by Frémaux that, in 1978, Rattle described the CBSO as “the best French orchestra in the world”.

Louis Frémaux, who died aged 95 in March 2017, was born in northern France. He attended the conservatory of Valenciennes, but his studies were interrupted by World War II. Too young to join the army, he became involved in the Resistance, and at the end of the War he joined the French Foreign Legion, serving in Vietnam. In 1947 he entered the Paris Conservatoire, where he studied conducting with Louis Fourestier, going on to win the institution’s first prize for conducting in 1952. He launched his recording career with the Erato label, and a notable success was the Requiem by the Baroque composer Jean Gilles, which won the Grand Prix du Disque in 1956, the year Frémaux began his nine-year tenure as Chief Conductor of the Monte Carlo Opera Orchestra. He first conducted the City of Birmingham Symphony Orchestra in 1968 and became its Principal Conductor the following year. The CBSO’s history had been somewhat chequered, despite attracting such principal conductors as Adrian Boult and Andrzej Panufnik, but Frémaux groomed the orchestra, taking it to a new level. While the team gained special renown for its performances of French repertoire, it also sustained a strong reputation in the works of modern British composers.

The vast majority of this Icon set is devoted to French music: Berlioz (notably the Grande Messe des Morts, the first recording project of the CBSO Chorus, which Frémaux established in 1973); Massenet; Bizet (including his rarely-heard symphonic suite Roma); Lalo; Saint-Saëns (including the Symphony No 3, a work closely associated with Frémaux); Fauré (the Requiem); Chabrier; Debussy; Dukas; Ravel; Ibert (whose music occupies almost an entire CD); Honegger; Poulenc (the Gloria, Piano Concerto and Les Biches) and Satie. The British-born composers featured are: Litolff; Walton (who occupies an entire CD, dominated by the two Façade suites), and John McCabe (1939-2015), whose Notturni was premiered by Frémaux and the CBSO in 1970.

Appearing for the first time on CD is a selection of arias by Leoncavallo, Puccini, Bizet, Sullivan, Lehár and Johann Strauss II, sung in English by the tenor by the Birmingham-born tenor David Hughes (1929-1972), who, before turning to opera, had enjoyed success as a popular singer; the arias are complemented by overtures by Offenbach. Other soloists appearing on the set include tenor Robert Tear, cellist Paul Tortelier and pianists John Ogdon and Cristina Ortiz.

All items in the set have been remastered from the original analogue tapes and digitized in full HD 24BIT/96kHz.

There's a lot of French music in this set: earthy readings of Poulenc’s Gloria and Les biches alongside a host of rarities...Walton’s Bach-inspired ballet The Wise Virgins is fun, and there’s an electrifying disc of music by the underrated pianist-composer John McCabe...An excellent set – 12 generously filled discs in an attractive slimline box. Essential.