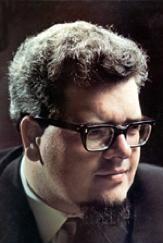 John Ogdon's life and career might be summed up as prodigious. A player of great strength and protean technique, Ogdon was unafraid, and in fact preferred, to tackle the biggest scores, including Busoni's mammoth Piano Concerto, Beethoven's "Hammerklavier" Sonata, the Concerto for Solo Piano (from the Op. 39 Etudes) of Charles-Valentin Alkan, and the four-hour Opus Clavicembalisticum by Kaikhosru Sorabji, which he first played in private recital at the age of 22. His repertoire was also massive: more than 80 composers were represented, with literally hundreds of scores, many of them committed to his unparalleled memory and more than 260 of them preserved in recordings. Ogdon also was a composer of nearly 200 works in many forms, a symphony and piano concerto among them, and he taught and wrote extensively on music. Even his size was impressive. Tall and with a tendency toward obesity, Ogdon brought power and strength to his performances, with critics often resorting to words like "thunderous" in their assessments.

Yet John Ogdon was always sensitive to the demands of musical architecture. An affable and approachable artist among his more aloof colleagues, Ogdon's primary concern was to communicate music's essence through clear delineation of its form. He also was capable of sensitive intimacy with his repertoire. When he was at the height of his powers, it was Ogdon's concentration and unrelenting but plastic control that impressed audiences.

Find out more at https://en.wikipedia.org/wiki/John_Ogdon