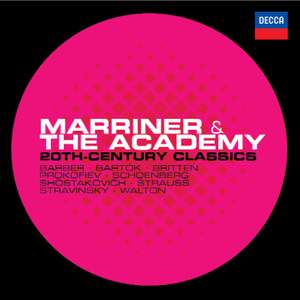 2. Variation of Apolllo (Apollo and the Muses)

4. Variation of Calliope (the Alexandrine)

Nielsen: Little Suite in A minor for strings, Op. 1 (FS6)

2. The Path Of His Beloved

March 2011: 50th anniversary of the first recording by Neville Marriner and The Academy of St Martin in the Fields for Decca's L'Oiseau-Lyre label [Concerti grossi by Handel, Torelli, Albicastro and Locatelli]

March 1964: first recording by Marriner and The Academy on ARGO [Handel: Concerti grossi, op.3] - the start of a very remarkable recording partnership that extended to other labels [most notably PHILIPS]

Over a period of 40 years Marriner and The Academy made over 300 recordings but it is the association with DECCA / ARGO that was so unique and resulted in a huge catalogue of recordings of Baroque and Classical repertory - many of which remain in the catalogue today.

Between 1967-77 a distinguished series of recordings of late 19th- and 20th-century repertory established themselves as classics of the gramophone. This 50th anniversary edition presents a selection of these albums in repertory that ranges from Wagner to Stravinsky, Bartók and Shostakovich.

Each CD is presented in a sleeve with a replica of the original LP cover.