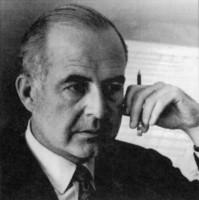 Samuel Osmond Barber II was an American composer, pianist, conductor, baritone, and music educator. One of the most celebrated composers of the 20th century; music critic Donal Henahan stated, "Probably no other American composer has ever enjoyed such early, such persistent and such long-lasting acclaim." Principally influenced by nine years of composition studies with Rosario Scalero at the Curtis Institute and more than twenty-five years of study with his uncle, the composer Sidney Homer, Barber's music usually eschewed the experimental trends of musical modernism in favor of utilizing traditional 19th-century harmonic language and formal structure that embraced lyricism and emotional expression. However, elements of modernism were adopted by Barber after 1940 in a limited number of his compositions, such as an increased use of dissonance and chromaticism in the Cello Concerto (1945) and Medea's Dance of Vengeance (1955), and the use of tonal ambiguity and a narrow use of serialism in his Piano Sonata (1949), Prayers of Kierkegaard (1954), and Nocturne (1959).

Adept at writing both instrumental and vocal music, Barber's works became successful on the international stage and many of his compositions enjoyed rapid adoption into the classical performance canon. In particular, his Adagio for Strings (1936) has earned a permanent place in the concert repertory of orchestras, as has that works adaptation for chorus, Agnus Dei (1967).

David listens to some great recordings of Samuel Barber, one of the finest American composers of the Twentieth Century.