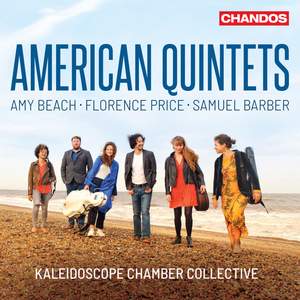 Judging by their passionate performances, this British team clearly feel utterly at home in this repertoire...The hit, undoubtedly, is the premiere recording of Price’s structurally lopsided... — BBC Music Magazine, August 2021, 3 out of 5 stars More…

Recording of the Week,  American Quintets from the Kaleidoscope Chamber Collective

The Kaleidoscope Chamber Collective was dreamed up in 2017 by Tom Poster and Elena Urioste. The Collective operates with a flexible roster which features many of todays most inspirational musicians, both instrumentalists and singers, and its creative programming is marked by an ardent commitment to celebrating diversity of all forms and a desire to unearth lesser-known gems of the repertoire. This ethos is clear in their repertoire selection for this their début recording. The Piano Quintet is one of Amy Beachs better-known works, composed in 1907, the work reflects the strong influence of the music of Brahms. Much of Florence Price's music remained unpublished at the time of her death. Additionally, a significant quantity of her manuscripts had disappeared without trace. It was not until 2009 that a cache of them (including two lost symphonies) was discovered by property developers in the attic of an abandoned house in Illinois including the score for the Piano Quintet in A minor that receives its world première recording here. Although characteristically conservative in its late\-romantic idiom, the piece celebra tes Prices African American heritage with echoes of spirituals and hymns, and the popular juba stomping dance rooted in the slave plantations of the Deep South. Between these two piano quintets sits Samuel Barbers early Dover Beach, a setting of Matthew Arnolds famous poem that has remained one of the best\-known works in the voice-and-quartet repertoire.

Judging by their passionate performances, this British team clearly feel utterly at home in this repertoire...The hit, undoubtedly, is the premiere recording of Price’s structurally lopsided but endearing A minor Quintet...And the icing on the cake? The Collective’s vigour and warmth.

I’d be delighted to listen to more Beach and Price performed with this courage, erudition and aplomb, and keenly anticipate the Collective’s next offering.

If Ohlsson and the Takács emphasised [the Beach’s] lush Romanticism, this new recording highlights its latent modernity, with an attractively lean, spare string sound matched by Poster’s luminous approach from the keyboard...The major attraction on the album, though, is the world premiere recording of Florence Price's Piano Quintet in A minor, which was discovered only twelve years ago.