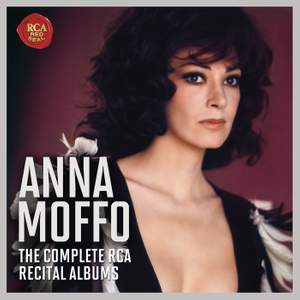 Herbert, V: A Kiss in the Dark from "Orange Blossoms"

Romberg, S: Lover, Come Back to Me (from The New Moon)

Kern: You are love (form Showboat)

Lehár: Yours is my Heart Alone from "The Land of Smiles"

Straus, O: My Hero from The Chocolate Soldier

Friml: Some Day (from The Vagabond King)

Romberg, S: Will You Remember (from Maytime)

Act I: Though honesty is said to be the policy that's best

Act II: Look at how I look

Act II: A waltz, let's have a waltz

Act III: Oh, for the life of an actress

Schertzinger: One Night of Love

Rodgers, R: Falling in love with love (from The Boys from Syracuse)

Brown, N H: Love is where you Find (from the Film 'The Kissing Bandit')

One of the brightest stars in the 20th-century operatic firmament, the Pennsylvania-born soprano Anna Moffo (1932–2006) enjoyed a meteoric rise in the 1950s and 1960s that saw her conquer all the major opera houses in Europe and America. After making her Metropolitan Opera début in 1959 as Violetta in La traviata, she went on to appear with the company in 200 performances of 21 roles over a total of 18 seasons, before finally singing her last complete performance – once again as Verdi’s Violetta – and retiring from the stage in 1976. Specially released to mark the 10th anniversary of Anna Moffo’s death (with booklet notes by Jürgen Kesting and full discographical details), Sony Classical’s new limited edition 12-CD original jackets collection finally brings together the 10 recital albums that Moffo recorded for RCA between 1960 and 1974, four of them making their first appearance on CD, newly mastered from the original analogue tapes using 24bit/96kHz technology.

Mostly dating from Moffo’s youthful heyday in the early 1960s, these treasurable reissues include new remasterings of such jewels from her discography as her ravishing recording of Canteloube’s Chants d’Auvergne (coupled with equally sensuous versions of Villa-Lobos’s Bachianas brasileiras No. 5 and Rachmaninoff’s Vocalise) under the direction of the legendary Leopold Stokowski and the fascinating double-album A Portrait of Manon, in which Moffo portrays the Abbé Prévost’s seductively immoral heroine in contrasting scenes from Massenet’s and Puccini’s rival settings of the story.

Rounding off the collection are two compilation discs: an original 1973 album of Great Love Duets from Opera, featuring Moffo in tandem with such famous tenors as Richard Tucker, Carlo Bergonzi and Alfredo Kraus, and now newly extended to include five extra tracks by Verdi and Puccini; and a brand-new compilation of arias from Moffo’s various complete RCA opera recordings, showcasing her in some of her most impressive roles: as Eurydice in Gluck’s Orfeo ed Euridice, as Serpina in Pergolesi’s La serva padrona, as an almost Callas-like heroine in Donizetti’s Lucia di Lammermoor, as a notably warm-toned Gilda in Verdi’s Rigoletto and, of course, as Violetta in La traviata, the signature role with which she had taken her leave of the stage in 1976.