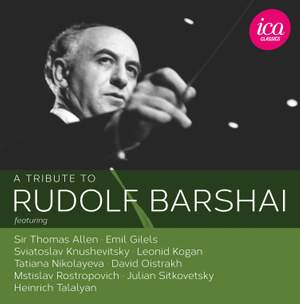 Offer, A tribute to Rudolf Barshai

Barshai’s death five years ago robbed the world of an influential figure and inspiring musician: violist, conductor, administrator, powerhouse. Through the energy and devotion of his widow Elena... — Classical Music, January 2016, 4 out of 5 stars More…

Dance of the Antilles Maids

Albinoni: Concerto for five instruments in D major, Op. 5 No. 3

Tartini: Cello Concerto in A major

V. Allegretto "On the Watch" (Live)

VIII. Allegro "Reply of the Zaporozhye Cossacks to the Sultan of Constantinople" (Live)

II. Sonnet No. 73, That Time of Year Thou Mayst in Me Behold

Prologue. The Birth of Apollo (Live)

Coda. Apollo and the Muses (Live)

Apotheosis. Apollo and the Muses (Live)

First Dance. The Earth in Autumn - Transformation - Preparation for the Second Dance

Second Dance. The Waters in Winter - Transformation - Preparation for the Third Dance

Third Dance. The Air in Spring - Preparation for the Fourth Dance

Russian-born Rudolf Barshai (1924-2010) was possibly the most famous viola player of all time. He performed as a soloist and in chamber groups with Shostakovich, Richter, Oistrakh and Rostropovich and later with Kogan and Gilels. He won numerous Soviet and international competitions.

He was the founding violist of the Borodin Quartet in 1945 and was a member until 1953.

In 1955, Barshai formed and led the Moscow Chamber Orchestra, a superb ensemble, which soon became internationally famous until he emigrated to the West in 1977. He was the artistic director of the Israel Chamber Orchestra from 1977 to 1981.

In 2000, Barshai produced a completion of Mahler's Tenth Symphony. Many of his recordings have earned critical acclaim and have won international awards in including the 1988 Gramophone Award, as well as awards for the complete Shostakovich Symphonies.

Barshai’s death five years ago robbed the world of an influential figure and inspiring musician: violist, conductor, administrator, powerhouse. Through the energy and devotion of his widow Elena this collection is indeed fitting.