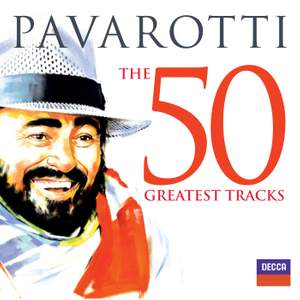 listen to the astounding talent of the young Pavarotti and your jaw will drop. — Opera Now, 3 out of 5 stars

In celebration of 50 years’ association with his one and only label, Decca [UK: 50th anniversary of British debut on August 25, 1963], we are proud to present Pavarotti The 50 Greatest Tracks. For the first time all material is fully remastered at 24bit for the best sound ever.

Incredibly good value: two CDs, each 85 minutes long – in all nearly 3 hours of music. All his opera hits including Nessun Dorma used as the 1990 World Cup theme tune and that made him a household name, as well as all his famous popular songs: O sole mio, Caruso, Santa Lucia, Volare and many more.

First official release of the first known recording of his voice, the aria ‘Che gelida manina’ recorded on his Italian professional debut in 1961.

Pavarotti The 50 Greatest Tracks - truly the definitive collection of the music of a great man and true legend.

listen to the astounding talent of the young Pavarotti and your jaw will drop.