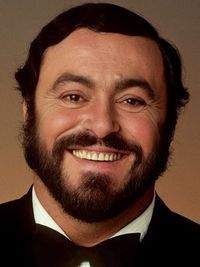 Luciano Pavarotti (born 12th October 1935, died 6th September 2007), an Italian tenor, was one of the greatest and most famous singers of his time, not only in the world of opera, but across all genres. He was born in Modena (Emilia-Romagna), in northern Italy.

Pavarotti enjoyed a fortuitous introduction to British audiences in 1963 when his idol Giuseppe Di Stefano fell ill, and Pavarotti replaced him at the London Palladium. The performance was broadcast to 15 million viewers and the young star was signed by Decca, heralding the start of a prodigious recording career.

His La Scala debut took place in 1965, the same year he went on tour with Australian soprano Joan Sutherland. Pavarotti remained forever grateful for what he learned from her about vocal technique and breathing. He made his debut at his beloved Metropolitan Opera House in New York in 1968, and was an international superstar within five years.

At Covent Garden in 1966, playing Tonio in Donizetti's La Fille du Regiment, Pavarotti was tricked by his conductor and became the first tenor to hit all nine high C's of the first aria.

In 1990, with his fellow tenors Placido Domingo and Jose Carreras, Pavarotti took opera out of the concert hall and into the stadium when he performed at the World Cup closing ceremony in Rome. He also made Puccini's Nessun Dorma forever his own. Pavarotti joined Domingo and Carreras again under the Eiffel Tower as part of the 1998 World Cup celebrations. This concert was televised to an estimated two billion people, a world record.

For more than 40 years, Luciano Pavarotti cut a most distinctive figure in the operatic world. His vast physique enabled his perfect pitch to reach the back of the opera house, but he was also capable of light, delicate phrasing. His rare combination of power and quality marked him out from his peers.

Find out more at https://en.wikipedia.org/wiki/Luciano_Pavarotti