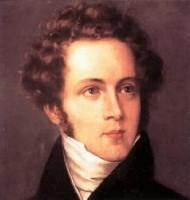 Vincenzo Salvatore Carmelo Francesco Bellini was a Sicilian opera composer, who was known for his long-flowing melodic lines for which he was named "the Swan of Catania". Many years later, in 1898, Giuseppe Verdi "praised the broad curves of Bellini's melody: 'there are extremely long melodies as no-one else had ever made before'."A large amount of what is known about Bellini's life and his activities comes from surviving letters—except for a short period—which were written over his lifetime to his friend Francesco Florimo, whom he had met as a fellow student in Naples and with whom he maintained a lifelong friendship. Other sources of information come from correspondence saved by other friends and business acquaintances. Bellini was the quintessential composer of the Italian bel canto era of the early 19th century, and his work has been summed up by the London critic Tim Ashley as:

The Latvian soprano and Italian baritone discuss their roles as Imogene and Ernesto in Bellini's early opera, recorded last summer in the composer's native Catania and released on Rebeka's own label Prima Classic last month.

The young Italian conductor talks to Katherine about recording Bellini's first opera, due for release tomorrow on Opera Rara.

Browse all further reading about Bellini