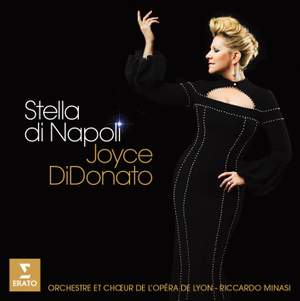 everyone who cares about singing should promote it immediately to the top of their letters to Santa. Creamy, sumptuous, almost flawless - every adjective may be a cliché, but how else to describe... — BBC Music Magazine, December 2014, 5 out of 5 stars More…

World premiere recordings and Italianate rarities from the queen of Bel Canto and coloratura. Following the success of her crowd-sourced ‘Best Of’ collection reJoyce and her electrifying Drama Queens album of Baroque arias, Joyce DiDonato returns to her heartland repertoire to celebrate the birth of Bel Canto opera in 19th-century Naples.

Alongside these little-known gems, Joyce presents a sumptuous Bel Canto banquet with music by the three greats — Bellini, Rossini and Donizetti — including the latter’s Maria Stuarda: a tour-de-force signature role for Joyce, recently screened in cinemas and released on DVD from the New York Metropolitan Opera.

Joyce DiDonato won a 2013 Grammy for her last Bel Canto album Diva, Divo, declared “an ideal vehicle for her glorious mezzo voice in which the most fiendish coloratura ornaments and trills sound effortless”. (The Observer)

“Ms DiDonato’s performance will be pointed to as a model of singing in which all components of the art form — technique, sound, color, nuance, diction — come together in service to expression and eloquence. Ms. DiDonato is simply magnificent, singing with plush richness and aching beauty.” The New York Times

everyone who cares about singing should promote it immediately to the top of their letters to Santa. Creamy, sumptuous, almost flawless - every adjective may be a cliché, but how else to describe singing of this quality?

warm tone, perfect control, a deeply sympathetic portrayal [of Maria Stuarda]. The finale of Zelmira provides DiDonato with the opportunity of showing off her brilliantly executed coloratura, while her mezza voce at the start of Romeo's farewell to the supposedly dead Juliet in Bellini's opera is sustained to perfection.

The sole Rossini aria, Zelmira’s imperious ‘Riedi al soglio’, also provides vocal thrills aplenty – but for the most part, this disc is more about long-breathed melodies and plangent laments than it is about pyrotechnics...A must for all fans of DiDonato, and well worth exploring for anyone who fancies an enthusiastic, committed guide to the highways and byways of bel canto.

They allow this adored US mezzo to display her dizzying technical virtuosity, her acting skills and her extravagant sense of drama. The Opéra de Lyon orchestra give characterful support...You may think bel canto recital discs are not your thing. Let Joyce DiDonato convince you otherwise. She did me.

The highlight, on many levels, is Mary’s prayer from Maria Stuarda – both in musical and performance terms, because here she is really inside the music in a role she knows backwards, and it shows in the freedom, character and control: she knows where she’s going.

DiDonato seems to have brought the performance and interpretation of the Italian bel canto repertoire to new heights, combining absolute technical security, intense but unmannered musicality, a beguiling range of colour and bell-like clarity of tone at a pitch of artistry that not even her nearest rival, Cecilia Bartoli, can match...This must surely rank as one of the greatest vocal recitals in recorded history.