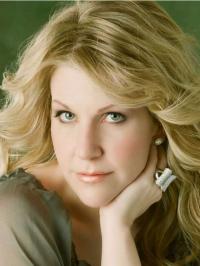 Wherever she sings, Joyce DiDonato earns rhapsodic reviews. With a voice "nothing less than 24-carat gold" as proclaimed by the Times of London, she is among the world's most enchanting performers.

Opera News magazine states: "The buoyant progress of DiDonato's career has been one of the happiest opera events of the past decade", while critics have called her technique "fearless" and praised performances ranging from "playful eroticism to imploding self-delusion to near-catatonic depression".

DiDonato has soared to international prominence in operas by Rossini, Handel, and Mozart, as well as in high-profile world premieres. Her signature parts include Rossini’s La cenerentola and Il barbiere di Siviglia - her Rosina at the Metropolitan Opera won over audiences in New York and on cinema screens all over the world, and she was called "the best Rosina around" by the London Sunday Times for the portrayal.

Born and educated in Kansas, she was a member of the young artist programs of the San Francisco, Houston Grand, and Santa Fe Opera companies after graduate studies at Philadelphia's Academy of Vocal Arts. After beginning her career in the US, DiDonato soon developed a growing and enthusiastic worldwide following in opera, concert and recital.

Honours bestowed upon DiDonato include Royal Philharmonic Society's Singer of the Year, the Richard Tucker Award (given to a single American singer annually), and prizes from the George London Foundation, the ARIA Award Foundation, the Sullivan Foundation, the Metropolitan Opera's Beverly Sills Award and Artist of the Year at the 2010 Gramophone Awards.

Find out more at https://en.wikipedia.org/wiki/Joyce_DiDonato

The American mezzo talks to Katherine about her new recording with Yannick Nézet-Séguin, which approaches Schubert's great song-cycle from the perspective of the woman whom the narrator leaves behind...