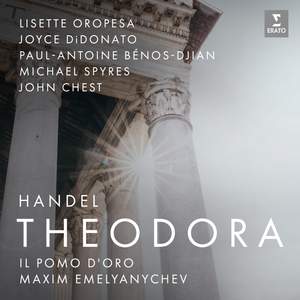 This is now the benchmark Theodora; it is optimally cast, dramatically intense and luminously beautiful. Its world-class principals use their fine vocal qualities to deepen their characters.... — BBC Music Magazine, Christmas 2022, 5 out of 5 stars More…

Chorus. "And Draw a Blessing Down" (Chorus)

Chorus. "For Ever Thus Stands Fix’d the Doom" (Chorus)

Recitative. "I Know Thy Virtues" (Septimius)

Recitative. "Though Hard, My Friends" (Theodora)

Air. "As with Rosy Steps the Morn" (Irene)

Chorus. "All Pow’r in Heav’n Above" (Chorus)

Air. "Kind Heav’n, If Virtue Be Thy Care" (Didymus)

Air. "With Darkness Deep, as is My Woe" (Theodora)

Recitative. "But Why Art Thou Disquieted, My Soul" (Theodora)

Air. "Oh That I on Wings Could Rise" (Theodora)

Air. "Though the Honours" (Septimius)

Recitative. "Oh, Save Her Then" (Didymus, Septimius)

Recitative. "Or Lull’d With Grief" (Didymus)

Recitative. "Or Say, What Right Have I to Take" (Didymus, Theodora)

Duet. "To Thee, Thou Glorious Son of Worth" (Theodora, Didymus)

Recitative. "But See, the Good, the Virtuous Didymus" (Irene, Theodora)

Air. "When Sunk in Anguish and Despair" (Theodora)

Theodora and Chorus. "Blest Be the Hand, and Blest the Pow’r" (Theodora, Chorus)

Duet. "Whither, Princess, Do You Fly" (Irene, Theodora)

Recitative. "Be That My Doom" (Theodora, Septimius)

Chorus. "How Strange Their Ends, Yet How Glorious" (Chorus)

Recitative. "On Me Your Frowns" (Didymus, Theodora, Valens)

Recitative. "And Must Such Beauty Suffer?" (Didymus, Theodora, Septimius)

Air and Duet. "Streams of Pleasure Ever Flowing" (Didymus, Theodora)

Recitative. "Ere This, Their Doom is Past" (Irene) 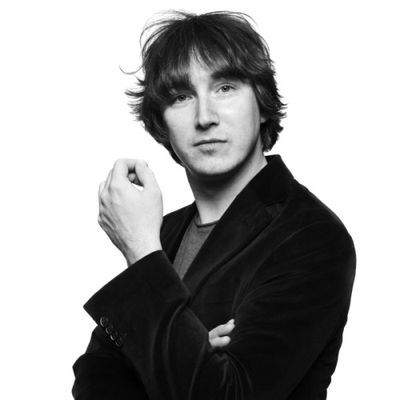 • True cast of stars for this recording of Handel’s masterpiece Theodora: Lisette Oropesa in the title role; Joyce DiDonato as Irene; Michael Spyres as Septimius; John Chest as Valens; Paul-Antoine Bénos-Djian as Didymus

• This follows the acclaimed recording of Agrippina, also with the winning team of Joyce, Maxim, and Il Pomo d’Oro – Gramophone Editor’s Choice of March 2021

• Great critical acclaim for the performances in Europe and at the Royal Opera House; German Opernglas called the cast a "Luxusbesetzung"

• "…the stage is dominated by the almost overwhelming presence of Joyce DiDonato. Physical presence, on the one hand, notably in the visual communication maintained with the choir … Vocal presence, on the other hand, so much the mezzo impresses by the depth of her commitment, the absolute mastery of her singing, the imagination and the audacity of her ornaments. Dramatic presence, one would have to add, by the incredible projection of the text … From a character of little theatrical interest, she ends up being the pillar of the work.” – Res Musica

This is now the benchmark Theodora; it is optimally cast, dramatically intense and luminously beautiful. Its world-class principals use their fine vocal qualities to deepen their characters. With a precocious band and commanding chorus under Maxim Emelyanychev, the result is spellbinding.

Oropesa brings a fuller, warmer sound to the title-role than many of her predecessors, and it makes for an interesting perspective on the character...Likewise, Joyce DiDonato’s fierce Irene is worlds away from the stoic, other-worldly serenity which Lorraine Hunt Lieberson famously brought to the role for Peter Sellars...Il Pomo d’Oro play out of their boots for Emelyanychev, whose occasional interjections from the harpsichord are always illuminating rather than intrusive.