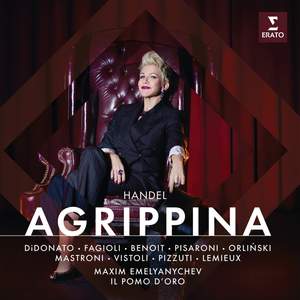 This Agrippina jostles for top place among the opera’s complete recordings. Joyce DiDonato is matchless in the title role, most other cast members likewise outstrip their rivals and their vocal... — BBC Music Magazine, April 2020, 5 out of 5 stars (Performance) / 4 out of 5 stars (Recording) More…

Joyce DiDonato has staked a powerful claim on the multi-faceted title role of Handel’s opera Agrippina. In the words of The Telegraph, she sings it with “authority, grandeur and high style”. She recently performed it to critical acclaim at The Royal Opera House, Covent Garden with Maxim Emelyanychev, Chief Conductor of Il Pomo d’Oro. Joining them on this recording is a cast of established and rising stars that includes Marie-Nicole Lemieux, Franco Fagioli, Luca Pisaroni, Elsa Benoit and Jakub Józef Orliński.

“Joyce DiDonato is a mezzo at the height of her powers, and she brings force to the title role in this modern take on Handel” Financial Times

“The star American mezzo-soprano Joyce DiDonato sizzles and burns in the title role, on peak vocal and dramatic form with a witty array of inspired gestures” The Observer

This Agrippina jostles for top place among the opera’s complete recordings. Joyce DiDonato is matchless in the title role, most other cast members likewise outstrip their rivals and their vocal qualities are ideal for their dramatis personae. Conductor Maxim Emelyanychev repeatedly hits the sweet spot in his tempos, dynamics and realisations, the score aiming to mirror Handel’s lost original.

DiDonato has the opportunity to show everything she can do. She uses her ease at the top of her voice to spin beautiful lines and sharpens Agrippina’s claws with her fearsome ornamentation...
Emelyanychev gets vital playing from his period-instrument ensemble Il Pomo d’Oro at the price of sometimes exaggerated effects.

Benoit is a delectable Poppea, both knowing and sympathetic…Orliński sings with rounded tone and a sure feeling for Handelian line…Emelyanychev’s direction of his responsive band combines fizzing theatrical energy with due regard for the opera’s more reflective moments. With DiDonato nonpareil in the title-role and a uniformly strong cast, this now becomes a first choice for Handel’s Venetian masterpiece.

DiDonato’s extraordinarily vivid portrayal alone ensures that this will be the Agrippina for many years to come…Benoit is a bright, fresh Poppea...Orlinski brings his much admired tonal beauty to the role, though his diction in recitatives leaves something to be desired. Franco Fagioli’s Nerone is a mixed blessing...Emelyanychev’s direction is full of verve and spirit, drawing committed and splendidly accomplished playing from Il Pomo d’Oro that admirably complements the est, invention and wit of the young Handel’s score.

DiDonato's thrilling, expressive coloratura and imperious top notes are as on-point as ever, but what makes this interpretation special is her sheer plausibility...turns in a performance of real emotional depth as Ottone…In an opera with such a preponderance of medium-high voices, it helps that his timbre is so immediately distinguishable from that of Fagioli. [Emelyanychev's] imaginative, often witty continuo contributions always enhance rather than intrude.

DiDonato is mistress of all she surveys as his scheming empress, with an expressive palette and tonal beauty to match the finest Handelians, as well as enviable breath control. Emelyanychev sets the seal on an outstanding set with conducting that sizzles with theatricality.