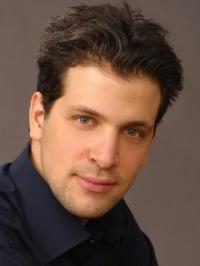 Italian bass-baritone Luca Pisaroni was born in Venezuela in 1975 and grew up in Busseto, where he was greatly inspired by observing the teaching of Carlo Bergonzi from a young age; he trained in Milan, Buenos Aires, and New York and made his professional debut as Mozart’s Figaro (a role with which he has been closely associated throughout his career) in 2001. Other signature-roles include Guglielmo, which he sang in Nicholas Hytner’s landmark staging of Così fan tutte at Glyndebourne in 2006 (‘unquestionably the finest Guglielmo to be heard in this country for some time.’ – The Guardian), Leporello (which he sang at Glyndebourne several years later and has recorded for Yannick Nézet-Séguin’s Mozart opera series on Deutsche Grammophon), and latterly Figaro and Leporello's aristocratic masters: he sang Count Almaviva at the Salzburg Festival in 2016 and will take on Don Giovanni at the Metropolitan Opera in 2019.

His repertoire also includes Golaud in Pélleas et Mélisande, Mustafa in L’Italiana in Algeri, Enrico in Anna Bolena and Alidoro in La cenerentola.

Pisaroni is the son-in-law of American baritone Thomas Hampson, with whom he frequently performs in opera and recital; the two appear as antagonists on Nézet-Séguin’s recording of Le nozze di Figaro on Deutsche Grammophon, and on Massimo Zanetti’s 2013 recording of Simon Boccanegra (‘Pisaroni's alarming Paolo [is] arguably the scariest on disc’ – The Guardian). A passionate dog-lover, his dachshund Tristan has appeared onstage with him in cameo-roles!

Find out more at https://en.wikipedia.org/wiki/Luca_Pisaroni