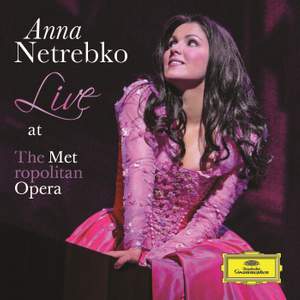 there is an alert sense of drama, which is where Netrebko really scores as a singing actress...While her bel canto is judged 'could do better', it's worth considering that, at 40, Netrebko is... — International Record Review, November 2011 More…

The forthcoming season marks the 10th anniversary of Anna Netrebko’s debut with the Metropolitan Opera, New York. The new album celebrates this milestone by bringing together her greatest MET moments throughout the past 10 seasons - performances never before issued on record and most never commercially released on any format.

Anna Netrebko's first operatic album sold more than 300,000 units, the second, Sempre libera, more than 400,000, while her live recording of Verdi's La Traviata has sold in excess of 350,000 on CD alone. This new album, capturing the thrill of her greatest performances on one of the world's most iconic stages, will be a major event for hundreds of thousands of fans who have followed her career in the opera house, on radio, on CD, on DVD and in cinemas worldwide.

Over the past decade, The Met has played host to many of the Russian soprano’s greatest triumphs, from Prokofiev’s War and Peace in 2002 to her most recent appearance, in 2010, as Adina in Donizetti's Don Pasquale. The album also includes virtuoso arias from Mozart's Don Giovanni, Bellini's I Puritani, Verdi's Rigoletto, Gounod's Roméo et Juliette, Offenbach's Les Contes d'Hoffmann, Donizetti's Lucia di Lammermoor and Puccini's La Bohème.

there is an alert sense of drama, which is where Netrebko really scores as a singing actress...While her bel canto is judged 'could do better', it's worth considering that, at 40, Netrebko is now just entering her prime.

The real treat is her Natasha in Prokofiev's War and Peace, conducted by Gergiev, with Dmitri Hvorostovsky as a dreamy Andrei. It's nicely recorded, too: some of Netrebko's discs capture the power of her voice at the expense of its opulence; here, you get a real sense of its force and beauty.

This compilation of highlights from Anna Netrebko's Metropolitan Opera roles makes a distinctive introduction to her talents...it's her solo aria from Roméo &amp; Juliette that proves one of the stand-out performances here, the other being a dazzling showstopper from Donizetti's Lucia di Lammermoor, "Il dolce suono", which has the audience justly bawling its acclaim.

They show Netrebko’s chameleon-like ability to alter her timbre according to repertoire: the ethereal, Sutherland-like soprano in Donizetti and Bellini is unrecognisable as the singer who delivers a hard-edged, glinting Natasha in Prokofiev’s War and Peace.