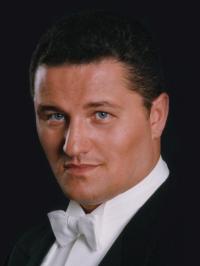 Piotr Beczała trained in his native Poland and began his career in Linz before becoming a member of the Zurich Opera. His international career took off with a spate of important house-debuts in 2004, including an acclaimed appearance in the small role of the Italian Tenor (Der Rosenkavalier) at Covent Garden, where he subsequently had great successes in the title-role of Faust and as the Duke in Rigoletto. In addition to the standard bel canto and Romantic roles, he is particularly renowned for his interpretations of neglected Slavic repertoire and received widespread critical acclaim for his recital-disc of this material on Orfeo in 2010. Awards and prizes include the Munich Opera Festival Prize in 2007 and a 2008 Grammy nomination for La Traviata on the Farao label

The Polish tenor talks to Katherine about Vincerò!, his debut recording on Pentatone, featuring arias by Puccini, Mascagni, Leoncavallo, Giordano and Cilea.

The Polish tenor is at the top of his considerable game in arias by Puccini, Mascagni, Leoncavallo, Cilea and Giordano.