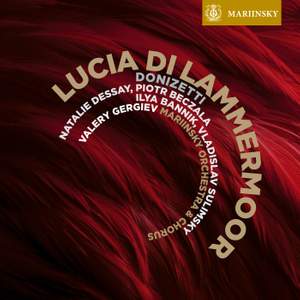 Everything Dessay does is lovely, but there is a lack of the desperation which should pervade the role...[Beczala is] actually more moving and Italianate than Dessay. Still, as post-Maria Callas... — BBC Music Magazine, October 2011, 4 out of 5 stars More…

No. 2b Larghetto "Cruda, funesta smania"

No. 3b Larghetto "Regnava nel silenzio"

No. 4b Larghetto "Sulla tomba"

No. 6a Duetto "Appressati, Lucia"

No. 6b Larghetto "Soffriva nel pianto"

No. 8b Meno mosso "Per poco fra le tenebre"

No. 9b Larghetto "Chi mi frena in tal momento?"

Recording of the Week,  Lucia from the Mariinsky

The Mariinsky label’s opera recordings have garnered acclaim and awards from around the world, most recently for Valery Gergiev’s recording of Parsifal released in 2010. For the label’s fifth opera, Gergiev conducts Donizetti’s masterpiece with a magnificent cast led by Natalie Dessay.

Natalie Dessay is one of the world’s most sought-after sopranos and an admired interpreter of lyric heroines. She is particularly renowned for her interpretation of the role of Lucia, which she has performed at the Metropolitan Opera, Royal Opera House and the Mariinsky Theatre. Future engagements include Verdi’s La Traviata with the LSO at the Aix-en-Provence Festival in July and at the Vienna State Opera in October.

Piotr Beczala is rapidly establishing a reputation as one of today’s leading lyric tenors. He has recently sung Edgardo at the Met and on tour in Japan, and this summer will perform at the Bavarian State Opera and Salzburg Festival.

Valery Gergiev recently won the Disc of the Year Award from BBC Music Magazine for his LSO Live recording of Prokofiev’s Romeo & Juliet. In July, Gergiev will conduct the Mariinsky Ballet at New York Metropolitan Opera and in August he conducts at the Edinburgh Festival and BBC Proms with the Mariinsky Orchestra before opening the LSO’s 2011-12 concert season.

In October he embarks on a major tour of the USA and Canada with the Mariinsky Orchestra, including residencies at Carnegie Hall and Berkeley. Forthcoming releases include the final instalment in his Mahler cycle on LSO Live featuring Symphony No 9 and the Mariinsky label’s first DVDs and Blu-Ray Discs.

Everything Dessay does is lovely, but there is a lack of the desperation which should pervade the role...[Beczala is] actually more moving and Italianate than Dessay. Still, as post-Maria Callas Lucias go, this is one of the best.

how authentic a Donizettian can [Gergiev] be? The basic answer is that the tinta he establishes for the work - a dark sound with good forward winds and present brass...creates real atmosphere...this is a neurotic, depressed Donizetti, surely right for this story. If this is not always Italian slancio, it certainly has its own mood and lift...It is also sensitive to dynamic markings: this is rarely a loud experience.

we can once again relish Dessay's extraordinary command of staccatos, her flexibility (the rapid scales in the Mad Scene cabaletta are stunning) and that uniquely pearly timbre...Finally, and most importantly, she phrases at all times with the sensitivity we have come to expect of her...Beczala, with his gleaming, immaculately centred tone and unfailing sincerity of address, stands comparison with any other recorded Edgardo.

In all honesty, there's little that's particularly Scottish about the score for Donizetti's melodrama after Sir Walter Scott - but it would be churlish to omit this tale of feuding Highland aristocracy. Natalie Dessay's fragile heroine is all the more pathetic against the suitably gutsy, red-in-tooth-and-claw playing of the Mariinsky under Valery Gergiev.

The recording is worth owning for Beczala’s classy singing as Edgardo, the only paragon here. The Polish tenor’s gleaming, if not Italianate, tone, superb diction and shapely phrasing are the set’s most consistent pleasures.

Here is a Lucia to match Callas or Sutherland. Natalie Dessay’s light soprano gives a vivid impression of Lucia’s vulnerable personality. The Mad Scene is enthralling. Piotr Beczala is a gloriously virile Edgardo, and the Italian style of the Russian cast more than acceptable. With Valery Gergiev a surprisingly sensitive conductor, this is a top-rank recording of a marvellous opera.

Here’s a Valery Gergiev recording in which, for once, the febrile maestro isn’t centre stage. This is all about Natalie Dessay’s performance as poor deluded Lucy. And if you thrill to the French soprano’s hypercharged, histrionic and occasionally wayward delivery of Donizetti’s mad scene, you will forgive the ebullient but sometimes rough-edged playing of the Mariinsky Orchestra...Top singing from Vladislav Sulimsky as Enrico.

there is something distinctively Russian about this Lammermoor. All those Italian melodies flow beautifully...But there is a sense of drive and purpose about this performance that seems, to me at least, distinctively Slavic...Dessay structures [the Mad Scene] well, always saving something in reserve for the build-ups and outbursts. Some excellent glass harmonica playing from Sascha Reckert...An intense but satisfying experience.