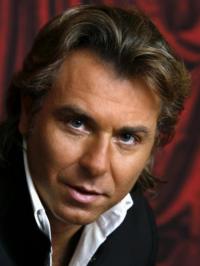 Born in France to Sicilian parents in 1963, Roberto Alagna was largely self-taught, working as a pizza-chef and busker in his youth before winning the Luciano Pavarotti Voice Competition in his mid-twenties. He made his opera debut shortly afterwards at Glyndebourne as Alfredo Germont, a role which he has sung over 150 times in the world’s major opera-houses. He has a particular affinity with the French Romantic repertoire, with signature roles Don José, Gounod’s Faust and Roméo and the title-role in Werther, and has recently achieved success in Verdi roles including Radames, Don Carlo and Manrico. In 1996 he married the Romanian soprano Angela Gheorghiu: the couple rapidly gained a high media profile, collaborating frequently on disc and in the theatre before their eventual separation in 2009. In addition to his wide opera discography, Alagna has also recorded successful compilations of Luis Mariano and Mario Lanza, both of whom he cites as formative influences.

Angela Gheorghiu sings the role of the eponymous swallow with Roberto Alagna as her naïve lover on a new DVD of Puccini’s unfairly neglected opera, filmed at the Metropolitan Opera last year with Marco Armiliato conducting.