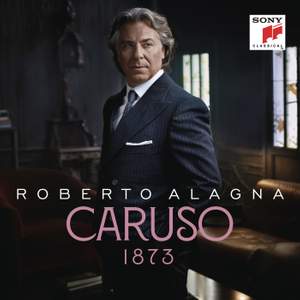 Alagna aims to replicate Caruso’s exact mannerisms, such as breathing patterns, tempos, vocal slides, flourishes and so on, But he also aims to reproduce not just a generalised historical style... — BBC Music Magazine, March 2020, 3 out of 5 stars (Performance) / 4 out of 5 stars (Recording) More…

Superstar tenor, Roberto Alagna, returns with his sensational new album Caruso. Caruso 1873 is Alagna’s tribute to the Neapolitan singer who Alagna considers to be the greatest tenor of all time. Alagna honours his legendary predecessor with a selection of repertoire drawn from Caruso’s own recording career, which stretched from 1902 to 1920. Alagna is accompanied by the critically acclaimed Orchestre National D’ile-de-France, singers Aleksandra Kurzak and Rafal Siwek and conductor, pianist and arranger, yvan Cassar. The music chosen is a journey back in time through Caruso’s eclectic repertoire. It showcases his personality and is blended with Alagna’s own favourites. The album offers many surprises and stretches from Handel and Pergolesi to verismo composers including Cilea and Leoncavallo, contemporaries of Caruso who wrote music for him. Puccini is represented by “Vecchia zimarra”, the bass Colline’s aria from La bohème which – as legend has it – Caruso once sang on stage standing in for an ailing colleague in perfect subterfuge. Caruso (1873—1921) was an Italian operatic tenor. Caruso was one of the first major singing talents to be commercially recorded.

Alagna aims to replicate Caruso’s exact mannerisms, such as breathing patterns, tempos, vocal slides, flourishes and so on, But he also aims to reproduce not just a generalised historical style but some very particular past performances. Alagna comes closest to a kind of pleasing mimicry in pieces in the ‘popular’ style…Sometimes he outdoes Caruso at his own game…but he usually seems less technically secure and nuanced.

It’s not a collection of Caruso’s ‘greatest hits’ but a judicious selection showing the enormous breadth of his recorded repertoire. Alagna would seem to be something of a gramophone ‘nerd’; although there is no attempt to imitate Caruso’s tone or his famous ‘sob’, he does adopt the great tenor’s phrasing and tempos. But when his tenor rings out, it’s pure Alagna...There’s something very charming about this album. It deserves every success.

Right from the start there’s an expressive immediacy to his singing, at which he hurls himself unstintingly, though without vulgarity...there’s an ongoing commitment to text and excellent legato.

Recitals reviving history’s vocal giants have become the fashion. But perhaps only an Elvis impersonator has gone to Alagna’s lengths, following the idol’s phrasings, breathing patterns and interpretative quirks...Maybe it’s best to forget the album’s concept and enjoy, as much as one possibly can, whatever and whoever turns up. Like Alagna and his passion for singing, infectious despite all the bumps.