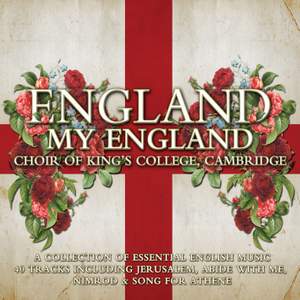 This anthology… is undeniably useful in gathering to one place these scattered gems of excellence, the more so the King's College performances guarantee a consistently high level of interpretation... — BBC Music Magazine, November 2009, 4 out of 5 stars More…

Goss, J: Praise my soul, the King of Heaven

Goss, J: Psalm XXIII: The Lord Is My Shepherd

Bairstow: Psalm LXVII: God Be Merciful unto Us, and Bless Us

Louis Bourgeois: All People That on Earth Do Dwell

Parry: Psalm LXXXIV: O how Amiable Are Thy Dwellings

Delius: To Be Sung of a Summer Night on the Water: I. Slow, But not Dragging

There is surely no more quintessentially English sound than that of the Choir of King’s College, Cambridge, its unaccompanied voices – evocative of immemorial sandstone, of cool cloisters, of evensong in church, chapel and cathedral – serene in the music of Shakespeare’s contemporaries Byrd and Gibbons, ethereal in Delius heard of a summer’s night across the Backs of the River Cam.

No less iconic is the chapel that lends its unique acoustic to that sound. One of the glories of the English perpendicular style of architecture, it was eventually completed in 1547, a little over a century after the founding of the college itself by Henry VI.

This collection opens and closes with coronation music: Zadok the Priest was written for the crowning of George II in 1727, I was glad for that of Edward VII in 1902. Both were so successful that they have been sung at every coronation since their premières. Parry’s ‘processional anthem’ is heard here in its full panoply of extra brass and shouted Vivats, the choir of King’s choir providing the semi-chorus in the exquisite interlude ‘O pray for the peace of Jerusalem’.

In between are motets ancient and modern – from the miniature If ye love me and the architectural splendour of the 40-part Spem in alium to William Harris’s dramatic double-choir Spenser setting Faire is the Heaven; well-known psalms sung to Anglican chant; and favourite hymns, notably All people that on earth do dwell, arranged ceremonially for another coronation, that of Elizabeth II.

As well as national rejoicing there is solemn remembrance. Come ye sons of art away is Purcell’s 1694 birthday ode for Queen Mary, Thou knowest, Lord part of the music he wrote for her funeral just nine months later. John Ireland’s Greater love hath no man is often heard on Remembrance Sunday; Sir John Tavener’s Song for Athene made a powerful impression at the funeral of Diana, Princess of Wales; while John Rutter’s small-scale, personal Requiem touched a wider public following the attacks of 11 September 2001. But ‘Nimrod’ above all epitomises music of national remembrance. Here a choral setting of it, Lux aeterna, represents our ‘Shakespeare of music’, Edward Elgar.

This anthology… is undeniably useful in gathering to one place these scattered gems of excellence, the more so the King's College performances guarantee a consistently high level of interpretation in repertoire they would regard as home territory.